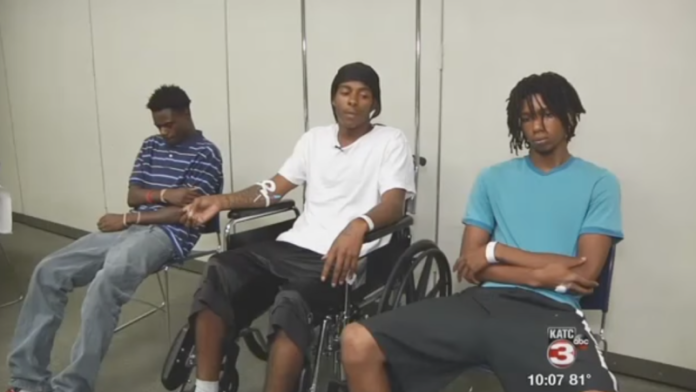 Three young Ville Platte, Louisiana men are recovering after all 3 were hit by a truck while walking along the side of the road.

To add insult to injury, they are facing charges, and the driver that ran them over isn’t.

Police have fined them for not wearing reflective clothing at night and charged them with obstructing a public passage, reported KATC.

Deonte Williams, 21; Cody Mayes, 19; and Tevin Wilson, 17, are healing from scrapes, bruises and staples, but they are mostly upset about the charges they are facing.

“For me to find out that this guy gets to just go home—we all get some misdemeanors and nothing happened to him,” Williams told the news station, “I’m upset about it.”

The incident occurred around 8 p.m. Tuesday along the road, which does not have any sidewalks.

“I just wake up; my cousin [is] telling me, ‘Don’t get up,’ and I was just full of blood,” Williams recalled of being hit by the truck. “When I wake up, I don’t see nobody with the truck there. I don’t see nothing but the ambulance leaving with me.”

Police say the motorist who struck the teens stayed at the scene and said that he had been blinded by the headlights of an oncoming vehicle.

However, Williams and the teens refute the statement, insisting that the driver was at fault and that they were not in the middle of the road at the time they were hit.

Williams told KATC that he and the others were walking on the side of the road near the grass when they were hit from behind.

“He must have had his lights off and going pretty fast because it hit all three of us,” Williams said.

According to KADN, Ville Platte Police Chief Neal Lartigue said that the case is still under investigation.

But the young men are just hoping that their charges are dropped.

“I guess the Lord got to work in his own way,” Williams told KATC.

Heroin Addicion Only Became an “Epidemic” and Decriminalized When the White Middle Class Was...