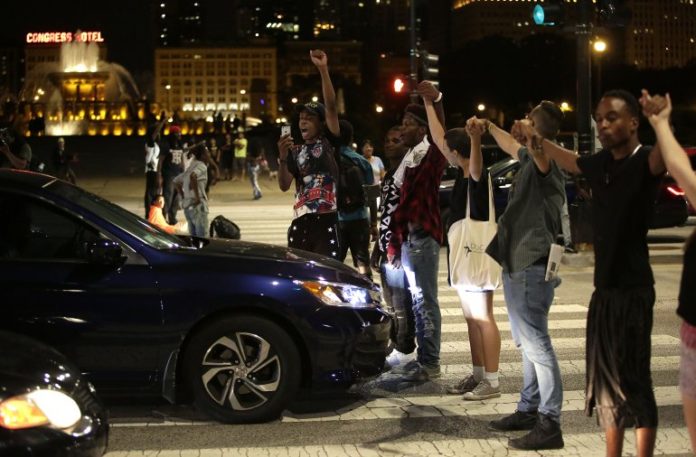 Several states are working on legislature that would protect drivers who hit protesters with their car. So far, none are officially enacted.

If these bills pass, some protesters will have to come up with a new strategy, or face being run over, with the law protecting the assailants.

Many of the bills were introduced after specific demonstrations or actions; many also contain language saying that the driver’s liability hinges on if the protesters have a permit for such demonstrations-which is ridiculous.

The Root reported on the details of each state’s proposed legislature:

In Florida Senate Bill 1096 was introduced in the Florida Senate inFebruary and a similar bill, House Bill 1419, was introduced in the FloridaHouse in March. The language of the legislation notes that the driver must “exercise due care” but if they maim or kill someone, the burden of proof lay on the injured person, not the driver, to prove that the driver’s actions were intentional. Both bills died in subcommittees.

In North Carolina, HB 330, excuses drivers from liability if they injure a protester blocking traffic. The bill was introduced in March after thousands took to the streets over the police killing of Keith Lamont Scott in Charlotte. The bill actually passed the House and is now in subcommittee before it goes to the state Senate.

North Dakota’s HB 1203 was introduced in February in response to Dakota Access Pipeline protests. According to its provisions, a driver who caused injury or death to someone blocking a roadway while “exercising reasonable care” would not be able to be held liable for damages. The bill did not pass the house.

In Rhode Island, HB 5690, introduced in March, protected drivers who are “exercising due care” and who injure a protester blocking the road. If the driver “purposefully” injures a protester, then they can be held liable, but you know that is determinant on the driver’s word (and if that’s anything like the police’s word, you know where this is going…) The bill now is “under further study,” as recommended by the House Judiciary Committee.

In Tennessee, like Florida, there were two bills introduced—one in the House and one in the Senate. SB 944 and HB 668 would protect drivers from being held liable if they injure a protester who is blocking traffic in a public roadway. Again, the driver would face charges only if they hit the person “purposefully.” The House bill failed in committee; the senate one is currently awaiting the approval of the Senate Judiciary Committee.

Texas introduced HB 250 last month. As in Florida, under this bill, drivers cannot be held liable if they were “exercising due care” at the time that they injured a person if that person was participating in a protest. The bill was referred to the House Judiciary and Civil Jurisprudence Committee in July but seems to have ended there.

These bills are extremely dangerous because they excuse bodily harm against those using their rights of free speech and peaceable assembly. We cannot allow bills like these to be passed into law.

Man Arrested in Charlottesville For Running Down Protesters In Vehicle Rampage