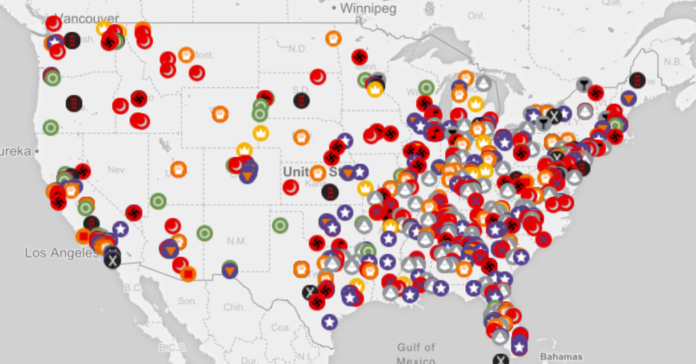 The Southern Poverty Law Center says there are currently 917 active hate groups scattered throughout the U.S.

Charlottesville, VA is where the hatred exploded over the weekend, but it is certainly not the only place where it could or will happen, especially considering the white supremacists largely believe President Trump supports their cause.

The SPLC provided this handy map showing the location of U.S. hate groups by the main type of hatred they promote:

SPLC found that the number of hate groups (defined as people harboring “beliefs or practices that attack or malign an entire class of people, typically for their immutable characteristics”) had been declining since 2011 but spiked around the time Trump announced he was running for president, reported HuffPost.

″[President Donald] Trump’s run for office electrified the radical right, which saw in him a champion of the idea that America is fundamentally a white man’s country,” the report stated.

“The hate was clearly tied directly to Trump’s victory,” the report stated.

The Post reported that many white nationalists, such as those involved in the violent clashes Saturday in Charlottesville while protesting the removal of a Confederate statue, have embraced Trump and felt emboldened by his rise to power.

Of course the white supremacist leaders cheered for the terrorist attack, and even threatened future attacks.

Other lawmakers on both the left and right criticized his soft response against the attacks.  Even Attorney General Jeff Sessions called the vehicle attack “domestic terrorism.”

The white supremacist groups see that as a sigh they have Trump’s support to continue terrorizing the nation in the name of white power and white superiority.

“He didn’t attack us,” Andrew Anglin, founder of neo-Nazi site Daily Stormer, wrote Sunday. “He just said the nation should come together. Nothing specific against us.”

“No condemnation at all,” Anglin continued. “When asked to condemn, he just walked out of the room. Really, really good. God bless him.”