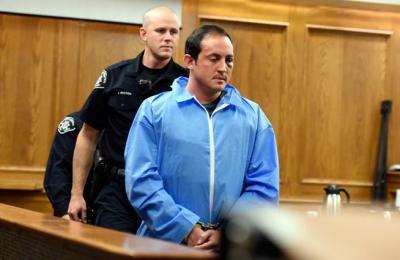 UPDATE: (a quote from New Zealand newspaper linked below):

“According to the affidavit, the Daily Camera report said, King and Sebastian were invited by different guests. However, one of the guests, Leah Akin, said she accidentally invited King, thinking she was inviting a friend with the same name. But when he arrived, he was welcome because the two had previously “hooked up”.

Another host, Gary Reeves, had invited Sebastian, but said the 32-year-old made him uncomfortable because he often talked about “interactions with the mob”.

Throughout the night, Sebastian flirted with a guest and told others he believed men “needed to be macho and aggressive to win over the attention and affection of women”.

Guests left the party and headed downtown for food and drinks and King and Sebastian got into an argument (allegedly about politics according to official reports) then Sebastian suggested they take it outside.

A chef and former marine ran out of the kitchen and disarmed Sebastian, who fought and struggled, the report said. Boulder police believe King was shot four times, in the ribs, chest, and shoulder, according to the affidavit.

If convicted of first-degree murder, Sebastian would face a life sentence as an automatic punishment. Prosecutors could seek the death penalty, but this is unlikely.”

We are so sorry to his family and friends and the loss of this great holistic doctor who had done so much for the world with his research and writings.

If you have ANY information but wish to remain anonymous, you may contact the Northern Colorado Crime Stoppers at 1-800-222-TIPS (8477) or you can submit tips through the Crime Stoppers website at crimeshurt.com.