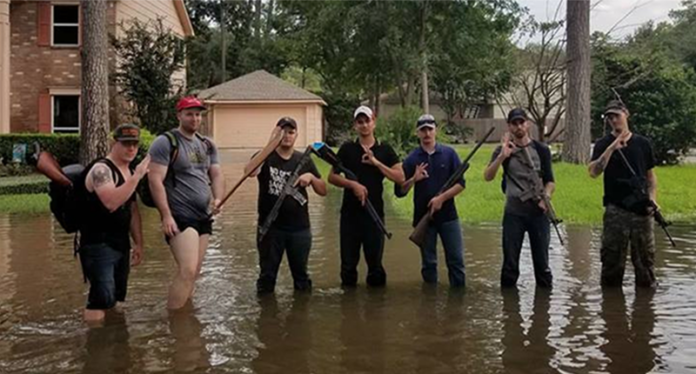 As Hurricane Harvey’s destructive wrath on the city of Houston is showing some signs of slowing with the water no longer rising and slowing rains, “Hundreds of people on the ground in Texas have rushed to Houston and surrounding areas to help with rescues of tens of thousands of people since Sunday. ” In times of crisis as much relief aid is appreciated, the intentions of some groups offering up their services is questionable.

“The Oath Keepers”, a militia group listed on the Southern Poverty Law Center’s list of extremist antigovernment groups have offered to have a presence in Houson. However, another far-right paramilitary group , “The Proud Boys”- are already on the ground patrolling the streets of Houston as a vigilante “anti-looting” squad.

The rains have slowed, the water is no longer rising and calls for help have overwhelmingly decreased.

So, the Oath Keepers are heading to Texas and asking their members to bring boats and specifically they’re asking for Oath Keepers who have first aid experience.

“They need our help,” their website says as part of a call for help.

Other towns that were hit with rains as the storm moved east are still in need of help, but it is unclear if the militia will be going to other towns.

By the time they arrive in Houston, they’re likely to encounter the problem that the vast majority of the rescues have already been done. They’ll also encounter the Proud Boys, another far right wing group of armed civilians. The group has been on the ground “patrolling” the city to ensure there is no looting.

The Proud Boys are lauding themselves for doing good- when in actuality it is more than likely an assertation of power over people just trying survive. It would be interesting to see how they vet who is trying to access their property lawfully versus who isn’t.

And as reported by Revere Press:

Violent white supremacists have a well-established history of using natural disasters as an opportunity to inflict deadly violence on  minority communities.

For instance, after Hurricane Katrina devastated New Orleans, “white vigilantes” shot and killed black storm victims “with impunity,” ProPublica reported. One of the worst racial massacres in American history took place after a hurricane struck Galveston, TX in 1900, when

The devastation in Harvey again opens the door for white supremacists to conduct a disguised lynching campaign, even as reports of “looting” are relatively low in the affected areas. Perceptions of “looting” are also strongly linked to race, as news media after Katrina referred to starving black victims as looters, but their white counterparts were just “finding” the food in the empty grocery stores.

The Proud Boys are known to harbor white supremacists and Nazis, and their posing with weapons after a disaster that disproportionately affected poorer residents and people of color is a continuation of this sinister American legacy.

Antifa tweeted out on Thursday: Proud Boys wading through Texas flood with AR15s and shotguns as ‘anti looting patrol,’ They don’t actually look equipped to help anybody,”

Proud Boys wading through Texas flood with AR15s and shotguns as “anti looting patrol”. They don’t actually look equipped to help anybody. pic.twitter.com/Wa1EeLSly9

It’s unclear whether either group will be willing to stay in Houston and work to help neighborhoods clean up or if they’re bringing clothing, food or supplies to those impacted by Hurricane Harvey. One of the things most needed by survivors who have lost everything is food and clean water. After that, another need will be clothing and then those who will be willing to help them when bills for their homes must still be paid. They’ll need help if they didn’t have flood insurance, which three-fourths of people didn’t have. Survivors will need experts to help them file for FEMA assistance and other things.

Some Proud Boys went to Texas to wave rifles around and be the “anti-looting patrol” (via @afainatl) pic.twitter.com/JV95BFoRKG

Here are some ways that individuals can help donate those hit by the storm.

What are your thoughts on these militia groups and their intentions behind “helping” Hurricane Harvey survivors? Would you feel safer with people like The Proud Boys patrolling the streets, or do you find their presence problematic? Share your thoughts in the comment section below.