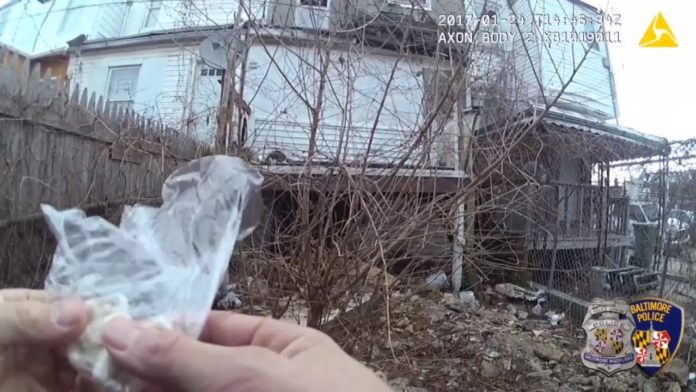 Baltimore State’s Attorney Marilyn J. Mosby has identified at least 43 cases that will be dismissed after a police officer admitted faking a police video.

Officially, the officer “self-reported” an incident that looked like the cop had found evidence, but it was actually a previously unreported “re-enactment of the seizure of evidence,” reported The Root.

In July, prosecutors released a video showing Police Officer Richard Pinheiro hiding a bag of alleged drugs in a backyard, walking into an alley, turning his camera on, and then “discovering” the illegal substances. Pinheiro was suspended pending further investigation, and the two cops with him were placed on administrative duty rather than being fired. That incident forced the state to drop 68 cases and review another 133.

A few weeks later, a second video emerged of officers searching a man’s car but finding nothing. The officers then turned their cameras on and miraculously found drugs in the same car. The state postponed 44 cases and are reviewing another 170 cases in which those three officers were involved.

In both cases, Police Commissioner Ken Davis gave a ridiculous explanation proving he is trying to cover up police corruption. He said he was was investigating the possibility that the officers legitimately discovered the drugs, but decided to re-enact the discoveries. He failed to give any explanation as to why the officers would perform this illegal and deceptive act.

Some speculate that officers are faking videos because they are under pressure to fulfill arrest quotas. WJZ in Baltimore reports it found an internal memo that warns officers that they need to “make statistics, car stops and produce warrants.” The memo goes on to say that the department will collect these stats every two hours to make sure officers are performing.

Police spokesman T J. Smith said of the latest allegations regarding what is now a third WATCH: “This is not an allegation of planting evidence. This is a self-reported situation where the officer felt that it deserved more scrutiny based on the things that have been in the news. … This is a good problem to have, when you are self-reporting.”

Despite what the spokesperson said, self-reporting is not a “good problem”.  The “good” thing to have would be honest officers that don’t plant evidence and fake videos in the first place.

Report Reveals Mother of Charlottesville Attacker Forced to Call 911 Multiple Times Due to...