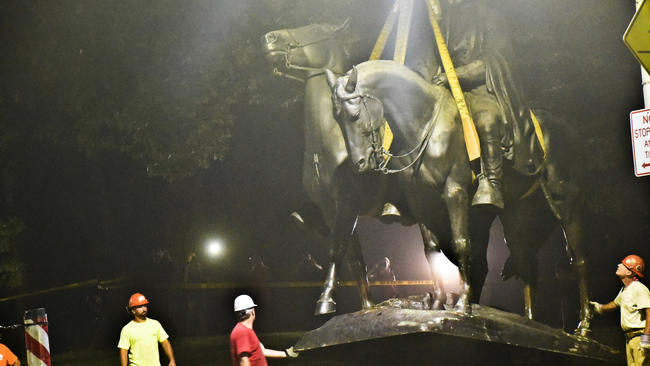 In an effort to protect their citizens, Baltimore didn’t wait around for violent white supremacists to invade their city. Instead, they chose to remove Confederate statues across the city very early Wednesday morning, not long after the Monday vote in favor of the removal after Mayor Catherine Pugh pushed for it.

Pugh said she is not concerned with possible legal challenges to the action because the city charter allows her to, “Keep our community safe,” if the mayor needs to “Protect the public.” After the recent white supremacist uprising in Charlottesville, Pugh felt like that was necessary.

And there they go. Lee and Jackson sailing through air onto flatbed truck in Baltimore at 3:40 AM. An amazing sight. pic.twitter.com/4SzRYRiVOB

Shortly after midnight Wednesday, a crew armed with a large crane along with a group of police officers began going around the city’s parks and public squares, tearing the statues from their pedestals one by one and removing them from view, reported The New York Times.

The people present for the removal seemed to largely overjoyed with the process.

Baynard Woods, the editor at large of the Baltimore City Paper gave a play by play about the removal of the four statues on Twitter, describing the mood as “celebratory”as small crowds gathered to watch the process.

“The police are being cheerful and encouraging people to take photos and selfies,” Woods told the Times.

All of Baltimore’s confederate monuments are gone. pic.twitter.com/a14QhTWI1d

Activists atop the Lee Jackson statue base. pic.twitter.com/IHbFtVQ81w

A monument dedicated to Roger B. Taney—a Supreme Court chief justice who wrote the landmark 1857 decision in the Dred Scott case that declared that even free blacks had no claim to citizenship—was also torn down. As the Times notes, Taney was never a part of the Confederacy, but the decision he wrote was cheered on by those who supported slavery.

Police cars escorted the statues out of town, and what will happen to them next is still being decided. Pugh suggested on Monday that the statues could be relocated to Confederate cemeteries.

Councilman Brandon M. Scott argued argued for their destruction at the meeting on Monday.

“These people were terrorists. They were traitors. Why are we honoring them?” he said.