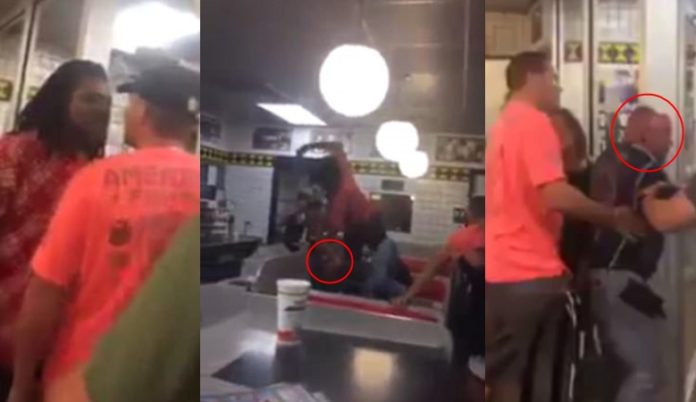 Days after the violent white supremacist riot in Charlottesville, Virginia, a fight broke out in the restaurant on Monday evening, seemingly because a white customer got angry about a black man — who was in front of him in line — being served first. The two shouted back and forth at each other, and things then got physical when the white man called the black man a “n***er.”

Another customer captured a video of the incident on his cell phone. As the video shows, several customers tried to intervene and break up the fight, but it took quite a few attempts before the two men were finally separated and the white man was shown outside.

The cell phone video, which has been making the rounds on social media, can be seen below

According to a recent report from Slate, 1,064 hate crimes, many of them racially motivated, have been reported since Trump won the presidency in November. Thirteen of those incidents were later deemed false reports, and 26 were perpetrated against Trump supporters. Even adjusting for those outliers, the number of people who have been attacked over their skin color, religion, and sexual orientation is far too high.

In May, Ryan Lenz, a senior investigative writer with the Southern Poverty Law Center, saidabout the rise in hate crimes since Trump won the election.

There is absolutely a “climate of hate and intolerance” in the United States, and President Trump isn’t doing anything to help it, especially as he refuses to condemn white supremacy and chooses to focus on the “alt-left” instead.