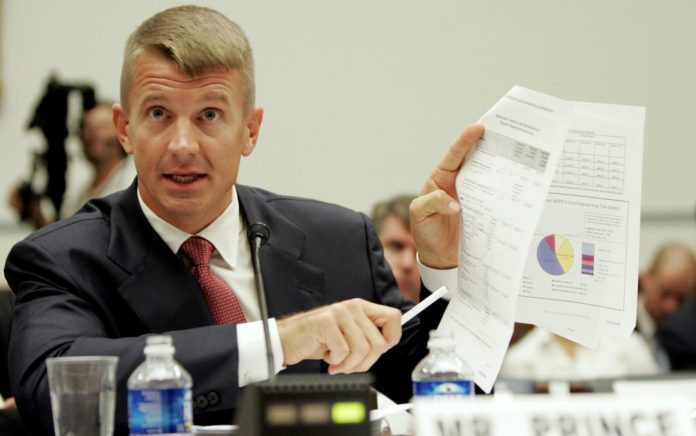 Erik Prince is the founder of the mercenary group Blackwater, which was made world famous for their many acts of terrorism and harassment against Iraqi civilians.

After Trump complained about the “losing” strategy in Afghanistan, Prince saw an opportunity to make some money by privatizing the war.

According to a report by Katrina Manson of the Financial Times on Monday, Prince has drafted a proposal—dated August 2017—that would hand the longest war in American history over to a private “band of experienced sergeants,” who would fight alongside U.S.-trained Afghan forces, according to Common Dreams.

Prince, Manson writes, “proposes a two-year plan for fewer than 5,000 global guns for hire and under 100 aircraft, bringing the total cost of the U.S. effort to turn round a failing war to less than $10 billion a year.”

Prince said his war plan will be very similar to the one he used in Iraq, where he had significant influence on U.S. policy.

The video below shows just a few examples from leaked footage of the terrorism and murder we can expect from this mercenary group if they are hired by the U.S. government to invade Afghanistan:

Prince, the brother of Education Secretary Betsy DeVos, argues that Trump should “restructure” the war—a process he suggests would resemble “bankruptcy reorganization”—by “aligning U.S. efforts under a presidential envoy,” which in a previous op-ed he called a “viceroy.”

Prince told CBS that his crew would not be mercenaries. They would simply be professional killers hired to terrorize people from another country, but definitely not mercenaries.

“The way the United Nations defines mercenaries, by being attached to the Afghan army, they would not be mercenaries,” Prince said. “So they would be contracted people, professionals, former special operations veterans that have experience in that theater to go do that work.”

Following the publication of his most recent piece, Prince appeared on CNN and noted that Steven Bannon, “some folks” at the National Security Council, and “quite a few” members of Congress have been receptive to his plan to privatize the war. The Financial Times further noted that “Central Intelligence Agency director Mike Pompeo visited Afghanistan last week to assess U.S. strategy and in part to consider how Prince’s proposal might fit into it.”

Critics point out the obvious problem that Prince’s plan will lead to deadly abuses by unaccountable forces, like those seen in Iraq.

Ronald Neumann, who served as the U.S. Ambassador to Afghanistan from 2005 to 2007, echoed these concerns in an interview with the Navy Times.

“There’s a bad record of contractors and human rights abuses,” Neumann said. “There’s no legal structure to govern this.”

Some even call Prince’s proposals “literal colonialism” and argue the plan is driven by his love for money and desire to profit from the drawn out war.

San Francisco Family Left Homeless After Their RV Was Towed Due To Unpaid Parking...

U.S. Airstrikes In Syria Kill At Least 43 Civilians Over Weekend