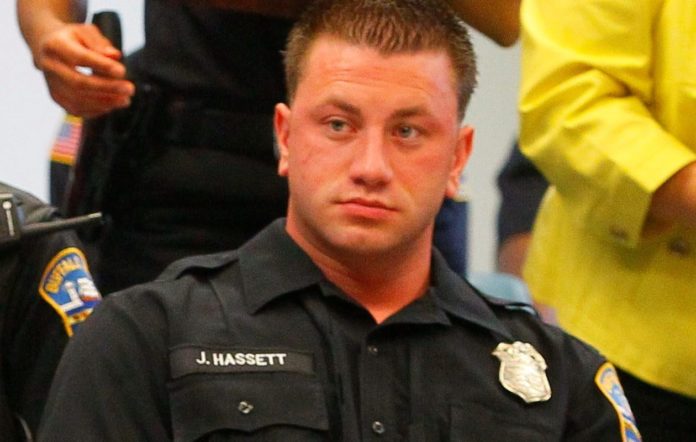 Buffalo police officer Joseph Hassett was arrested Tuesday on charges related to the assault of a handcuffed suspect.

This convinced multiple law enforcement sources to tell News 4 that he has also been accused of roughing up people in custody several times in the past.

Hassett was suspended for 30 days without pay. He will remain suspended with pay until the criminal case is resolved, according to WKBW.

Hassett, 31, was charged Tuesday with multiple counts of assault and official misconduct after authorities said he assaulted a suspect in his custody at central booking downtown.

The suspect, Timothy Staton, was handcuffed and being processed into the city jail on March 18, when Hassett is accused of sweeping his legs, or tripping him.

As expected, Hassett’s attorney, Timothy Hoover, thinks police brutality is OK if the victim is “resisting”, so he said Staton was resisting when his client assaulted the handcuffed victim.

The move caused Staton to strike his head on the ground, which opened a wound above his eye that required a hospital visit and stitches.

“Injuring or roughing up a prisoner, in my opinion, is wrong,” The Erie County District Attorney John Flynn said Tuesday. “It will not happen under my watch.”

Hassett was so innocent of the assault that he lied on the incident report about what he did.

“Hassett is also accused of lying on an internal report about what happened. His attorney said Tuesday his client used justified “limited” force,” reported News 4.

The details of those allegations an possible investigations is not known at this time.

Former U.S. Attorney William Hochul could not be reached for comment about whether his office investigated the allegations at the time.