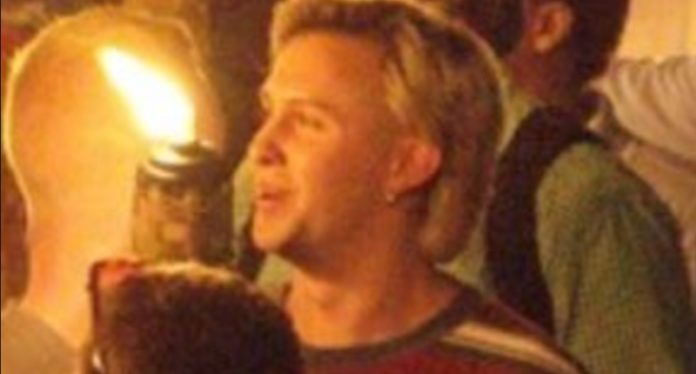 Proving he is clearly not part of any master race based on the amount of melanin in his body, Cole White of Berkeley, CA has lost his job at Top Dog — a chain of hot dog restaurants, reported David Ferguson of Raw Story.

“Effective Saturday 12th August, Cole White no longer works at Top Dog,” said an email statement from the restaurant chain. “The actions of those in Charlottesville are not supported by Top Dog. We believe in individual freedom and voluntary association for everyone.”

(DMs are open if you want to stay private)

On Saturday, Twitter user @YesYoureRacist began to circulate photos of the tiki-torch-carrying mob of white supremacist who marched on Friday night, as well as photos from the “Unite the Right” march, which quickly turned into domestic terrorism when a 20-year-old white supremacist rammed his car into a crowd of anti-fascist marchers, killing 32-year-old Heather Heyer and injuring dozens more.

Even before the weekend, white supremacists were calling on their followers to prepare for violence at the rally.

Using the hashtag #GoodNightAltRight, @YesYoureRacist collected identification on a number of racist marchers, including White and James Allsup, the president of Washington State University’s chapter of the College Republicans, according to Ferguson.

Another marcher — identified as 20-year-old Peter Cvjetanovic — tried to lie his way out of it after being exposed as one of the hate filled marchers, insisting he’s “not the angry racist” people see in the viral photos, even though he obviously is the person seen in the photos.