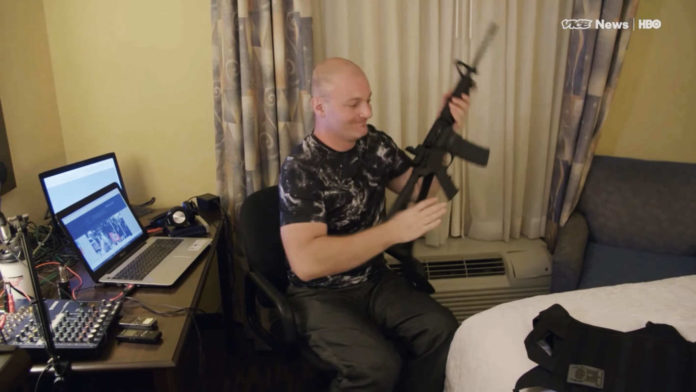 In an outrageous claim that no one is buying, Chris Cantwell’s lawyer claims the infamous “Crying Nazi” was just joking about killing Jews.

According to The Daily Beast, Cantwell‘s new lawyer called Cantwell a “shock jock” and compared him to the Jewish comedian Jackie Mason.

The claim was made during a four-hour bail hearing for Cantwell on Thursday night. Cantwell faces three felony charges stemming from an incident at the University of Virginia on Aug. 11, in which he pepper-sprayed at least two people during a torchlight procession of hundreds of white supremacists who chanted Nazi slogans.

The report went on to describe Cantwell’s lawyer, who was his fourth choice after three others refused to take his case.

“Cantwell’s attorney is Elmer Woodard, who appeared in court wearing an early-1800s-style red waistcoat with gold buttons, bowtie, white muttonchop whiskers, black velcro shoes, and a a 1910s-style straw boater hat,” the report states. It also noted that Woodard once unsuccessfully tried to defend a man who raped a teen girl by attempting to blame his client’s actions on sleepwalking.

Cantwell was initially granted a $25,000 cash bond on Thursday, but during a second hearing hours later, a judge denied the bond based on his propensity for being a flight risk and a threat.

At the hearing, Woodard tried to defend Cantwell with some hilarious attempts:

Albemarle County Commonwealth’s Attorney Robert Tracci asked Judge Sheryl Higgins to allow him to introduce as evidence videos of Cantwell making violent statements, including some of his closing words in the Vice documentary: “I think [Heather Heyer’s death] was more than justified… I think that a lot more people are gonna die before we’re done here, frankly.”

Woodard objected, claiming that videos of his own client speaking were hearsay evidence. “How is it hearsay when it’s your client’s own words?” Higgins replied, overruling Woodard’s objection.

Woodard even tried to suggest Cantwell was spraying water on people rather than pepper spray…unfortunately, Cantwell already admitted to using pepper spray on people.

Cantwell is being held in solitary confinement for his own protection at the Albemarle-Charlottesville Regional Jail. His preliminary hearing ahead of trial is set for Nov. 9.

Watch: Neo-Nazi Leader Cries Like A Baby Because He’s Wanted For Arrest