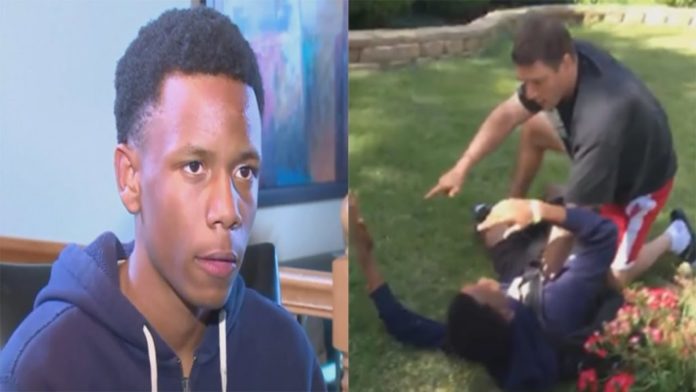 The lawsuit, which was filed Thursday in federal court in Chicago, alleges that Jordan Brunson, 15, was attacked by off-duty Police Officer William Mason even though Jordan never posed a threat. The village of Lansing is also named as a defendant in the suit, reported The Chicago Tribune.

The June video shows the officer pinning Jordan down to the grass using his knee, with his hand on the boy’s neck as the distressed teenager pleaded to be released.

“You guys are on my fucking property!” Mason said. “I could fucking kill you.”

Jordan said that he was trying to help a friend, who was sitting on the officer’s porch because the other boy had been beaten up pretty badly in a fight.

The Lansing Police Department version of events stated Mason “detained” Jordan because he and his friend refused to follow orders to remain on the property until authorities arrived.

Andrew Stroth, who is representing Jordan and his family, says they hope “to send a message” to Lansing by taking the issue up to the courts.

A spokesperson for Lansing said the village did not have an immediate comment about the case. Mason also didn’t respond to queries about the pending litigation.

DEA Takes $Billions From Racially Profiled People Never Charged With A Crime And Has...

50 Immigrant Women and Children Dumped by ICE at Closed Bus Station in Hurricane...