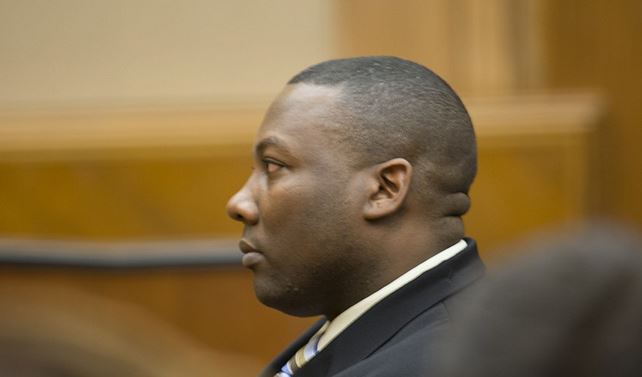 BEAVERTON — Officer Christopher Warren has been found guilty of raping a 5-yr-old girl inside his home.

Officer Warren showed no emotion as the guilty verdict of first-degree child rape was read back to him, according to reports.

He was placed in custody and escorted out of the courtroom, and is now being held at the Clark County Jail.

The jurors all decided unanimously that he was guilty after hearing testimony from the girl herself as well as other evidence.

Officer Warren has not received a sentence yet, though some suspect that it will be an extremely light sentence, given his state-privilege as a police officer.

The girl was 5-yrs-old at the time the rape occurred One year later, at the age of six, she gave her testimony of what the officer did to her.

We must warn you, the details are disturbing.

Officer Warren had the little girl to himself inside of his home.

With nobody else around to watch what he was about to do to her, Officer Warren took out a pencil, according to reports.

It is not known whether the pencil was sharpened or dulled.

The girl reported that when Officer Warren forced the pencil into her genitals, it felt weird, and caused her pain, according to reports.

The girl was also interviewed on tape by a counselor and that recording was played back for the jury.

Moreover, Dr. Kimberly Copeland, who had examined the girl just weeks after the rape reported that the girl said it hurt when she “went potty.”

It turns out that this is not the first time now-former officer Warren has been in trouble as a cop.

In 2011, an investigation found that he lied during accusations that he sexually abused another minor.  At that time investigators believed that Officer Warren probably committed the offense.

However, Officer Warren was never prosecuted, because the minor did not want to testify.

The reason that the minor did not want to testify is unknown.

Despite the investigation, Officer Warren got to keep his job as a police officer.

But in 2013, he was indicted for welfare fraud after it was discovered that he had been stealing food stamps despite being on a paid salary as an officer.

Officer Warren was given only 10 days in jail and 100 hours of community service.

He was never convicted or sent to prison for the previous sexual abuse, nor for the relatively lesser crime of stealing food stamps.

Many believe that had he been locked away for the previous sexual abuse, he would not have had the chance to rape the 5-yr-old girl. But because he was a police officer, he got away with it, and an innocent victim has now been scarred for life.