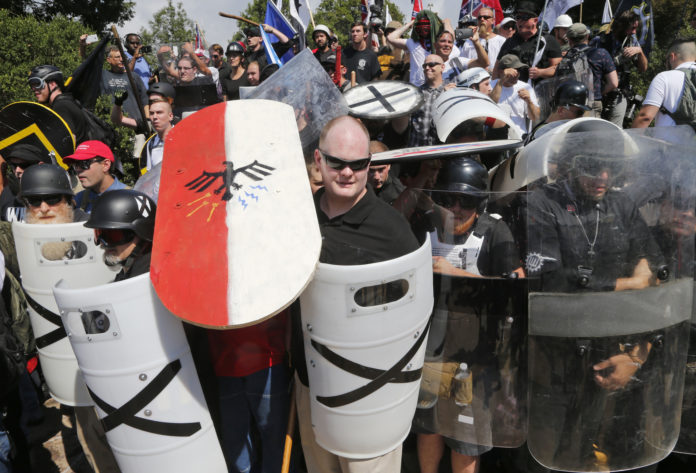 After the violent white supremacist rally in Charlottesville, VA, a Texas college town is next on the list for the white power hate groups.

After seeing the carnage in Charlottesville, Wiginton publicly announced his plans on Saturday afternoon. On Sunday, Wiginton said Spencer confirmed that he planned to attend.

Saturday’s press release announcing the event declared, “TODAY CHARLOTTESVILLE TOMORROW TEXAS A&M” . This seems to be a clear indication that he would like to see at least the same level of violence that left 1 person dead after a white supremacist terrorist attack.

The counter protest is already being planned, after news of the rally immediately generated social media outrage. Within hours of Wiginton’s announcement, an event dubbed “BTHO Hate” was announced, which is from an A&M football chant that is used to encourage the home team to “beat the hell outta” the opposing team.

The organizer of the counter protest, Adam Key, a doctoral student at A&M, said that their non-violent stance will be used to “demonstrate that members of the Aggie community do not support the hateful bigotry espoused by Wiginton and the planned speakers.”

“White supremacists keep coming to our campus thinking we’re going to support them,” Key said. “Just like the last time they showed up, we want to demonstrate as clearly as we can that their ideas are not welcome here.”

“We hoped that December was the last time we would have to protest them,” Key added, referencing when Spencer was last at the university to give a speech to about 400 people. “Aggies started fighting Nazis in World War II. We have no plans to stop any time soon.”

Spencer’s last talk was repeatedly interrupted by shouting and pushing among people in the crowd, while thousands of people protested outside, leading the Texas Department of Public Safety to clear out the student center where the event was being held.

Wiginton said he expects white superiority groups from across the country to attend his rally.

“Various groups throughout the country concerned with the political status of whites in America will be attending as well,” he added.

A&M officials are developing their own solution, given that it is a public university and it is limited by the First Amendment in how it deals with objectionable events on campus. The Supreme court ruled that even hate speech is protected by the first amendment.

A&M System Regent Tony Buzbee, who is also a Houston lawyer, said that he has looked into whether the university can keep Wiginton and his hateful event off campus.

“Because we offer these facilities to the public for use, we cannot deny such use due to political ideology or speech content,” Buzbee said. “The First Amendment allows speech like this, even though it is repugnant and wrong.”

Buzbee had some powerful words for Wiginton, saying he is just seeking attention.

“[Wiginton] has never accomplished anything positive in his life and never will,” Buzbee said. “It is a damn shame that our university, which sent more officers to fight the Nazis than all the service academies combined, would be tarnished by trash like him. But, in the end, the best way to deal with a lowlife like him is to ignore him.”

Paula White: Trump Is Under Spiritual Attack Because Demons Are Afraid Of His SCOTUS...