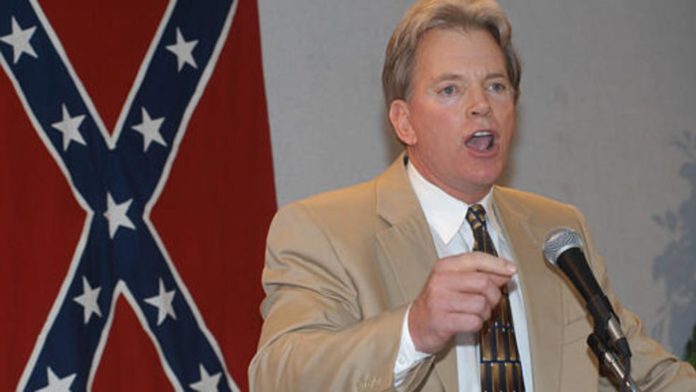 After Trump refused to directly blame the white supremacists for the violence and terrorism they were responsible for in Charlottesville, he got a nice thank you for his support from a famous white supremacist leader.

White nationalist leader David Duke thanked President Trump for his honesty and courage in blaming the violence in Charlottesville, Va., on the “alt-left.”

Thank you President Trump for your honesty & courage to tell the truth about #Charlottesville & condemn the leftist terrorists in BLM/Antifa https://t.co/tTESdV4LP0

Trump believes the ones standing up to the Nazis and their hatred are responsible.

At a press conference Tuesday, Trump doubled down on his claim that “both sides” were to blame for the violence in Charlottesville, reported The Hill.

“What about the alt-left that came charging at the — as you say, the alt-right?” Trump said.

“Do they have any semblance of guilt? What about the fact they came charging with clubs in their hands, swinging clubs? Do they have any problem? I think they do,” he continued. “As far as I am concerned, that was a horrible, horrible day.”

Apparently Trump thinks people need a permit to stand up to hatred and violence, because he accused left-wing anti-fascist or “antifa” protesters of showing up “without a permit,” and said they were “very, very violent.”

“And nobody wants to say that. But I’ll say it right now,” Trump told reporters. “You had a group on the other side that came charging in without a permit, and they were very, very violent.”

Duke also attended the Charlottesville rally where he reiterated his support for Trump.