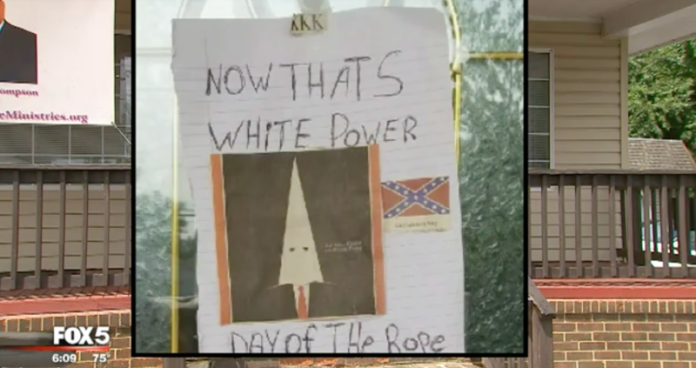 A predominantly black Prince William County church has been the latest target of racists after messages of hate were posted up at the church’s front entrance over the weekend.

According to Fox 5 DC, church members at Greater Praise Temple Ministries in Dumfries, Va., found the disturbing messages on Sunday. The news station was told that it took officers about two hours to respond to a call from the church after it was reported.

One of the signs in question showed the front cover of the German magazine Der Spiegel, which features President Donald Trump wearing a Ku Klux Klan hood: an image that came as criticism of Trump’s outrageous response to the violence following the white supremacist rally in Charlottesville, Va. Accompanying the photo were the words, “Now that’s white power. Day of the rope is coming niggers.”

A second sign pictured several swastikas with the words, “The Fourth Reich.”

“It’s very disturbing … there are a lot of churches in this area,” a member of the church identified only as Sister Gwen told the news station. “But for the people of color, we have to go through this—it’s like taking a step back to the ’50s and ’60s.”

Sister Gwen said that until the police catch the perpetrator, all that she and her church group can do is pray and help educate.

Police say that a police report was filed both online and over the phone but added that there was no indication of anyone being in fear of their lives … because that is definitely where the bar should be set, right?

Nonetheless, despite taking two hours to come out to the crime scene and seemingly being unconcerned about the threats, police say that they are currently investigating the incident as a possible hate crime.