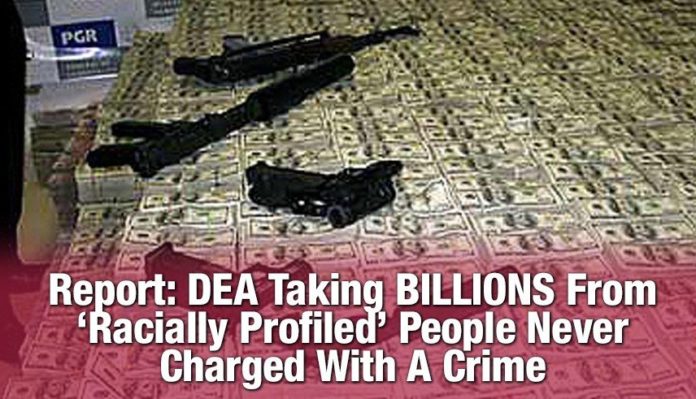 Since 2007, the DEA has taken in $4.15 billion in cash forfeitures. Of that, $3.2 billion ― or 81 percent ― involved cases in which no criminal charges were filed. These sorts of seizures, usually made without a court-issued warrant and without the presence of narcotics, carry the highest risk of violating civil liberties, according to the report. With no independent judicial oversight and weak protections for property owners, opponents argue that members of law enforcement routinely abuse civil forfeiture.

That was according to a report in the Huffington post that outlined the findings of Justice Department inspector general report that was released on Wednesday.

Civil forfeiture is a crime-fighting tool according to lawmakers which basically allows the DEA to confiscate anything they want if they believe it’s linked to a crime BUT with sloppy reporting and a lack of correlation to results the DEA can’t actually say that this ‘theft’ is doing any good at all.

The Huff article went onto say:

Investigators instead chose to focus on a sample of 100 DEA cash seizures made without a warrant or the presence of drugs. Of these seizures, 85 were part of interdiction activity at transportation facilities or along highways. The smallest seizure involved $3,000 confiscated at an airport.

Only six of these 85 cases were prompted by pre-existing intelligence about a specific drug crime, and most were associated with cold consent encounters, which involve officers approaching people they suspect of involvement in drug trafficking and asking their permission to conduct a search. The inspector general’s office has criticized this practice as being prone to racial profiling.

In over half of the 100 cases examined, there was no discernible evidence the seizures advanced law enforcement efforts, the report found. In only 44 cases could the DEA say conclusively that the seizures had “advanced or been related to ongoing investigations, resulted in the initiation of new investigations, led to arrests, or led to prosecutions.”

Basically it allows them to operate themselves like a gang without impunity.

Racist Man Rants On Q Train: ‘Get The F**k Out Of My Country’ Threatens...