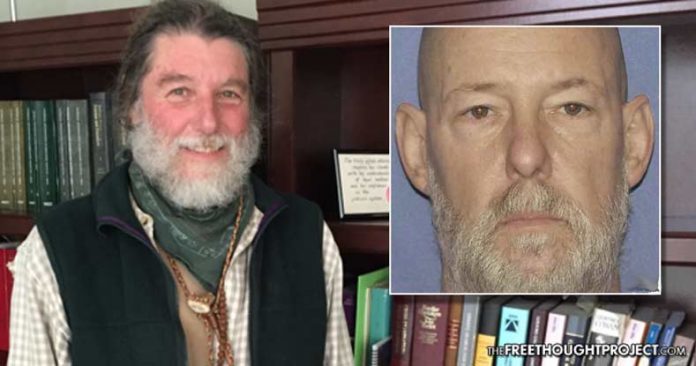 The daughter of a doctor who was sentenced to 18 years in prison after he was reported for using cannabis to help his autistic son, is now speaking out about how the state went after her father and ensured that he received the maximum sentence.

To highlight how corrupt the system is, around the same time the doctor was sentenced to 18 years for helping people with a plant, a deputy who admitted to despicable acts against an innocent woman received no time behind bars.

Former deputy Robert Retford, with the Johnson County Sheriff’s Department, was arrested last November on charges of sexual assault. His alleged victim was apparently seeking help from the deputy when she said he beat her, raped her and defecated on her, and then made her drink his urine. This month, Retford pleaded guilty to sexually assaulting the woman and will not spend a single day in jail.

The blue privilege plea deal was negotiated last May, and for admitting to the heinous crimes against his victim, he was only sentenced to six months probation — no jail.

The Free Thought Project first reported on the story of Dr. Gordon Piland III in March. He was arrested after a school social worker reported that he was giving cannabis-infused goat milk to his autistic son. When conducting a follow-up search of Piland’s home, police found marijuana plants growing in the backyard, two bottles of decades-old prescription pills, and a small bag of poppy seeds, which was a gift from a horticulturist.

In an exclusive interview with TFTP, Piland’s daughter Lucy Snow claimed the prosecution used the fact that Piland was in possession of his deceased parents’ prescriptions, and his property’s proximity to an unmarked daycare, as impetus to charge him with trafficking in heroin. As a result, Piland was sentenced to 18-24 years in prison and a $500,000 fine.

As we previously reported:

“Monroe Gordon Piland III (69) has lived an amazing life according to some estimates. In the late 1960s early 70s, Piland served as a naval officer, during the Vietnam war. Upon his return to the states, he earned a degree in nutrition from The University of California – Berkeley, and later a medical degree from the prestigious Wake Forest University, formerly a Southern Baptist university. He completed his medical residency in Elizabeth City, NC, and was a board certified medical doctor from 1979-1984.”

While Piland has managed to keep his love for cannabis under the radar since in the 80s, he was going through a tenuous custody battle over his autistic son. His son’s mother was not a cannabis advocate, yet Piland would offer his son goat’s milk infused with cannabis as treatment for his behavioral and cognitive deficits. When the school’s social worker discovered the fact, she sent police to his home to investigate.

As TFTP has reported, many parents—including some politicians—are now giving their children cannabis for autism with astounding results.

That home visit led to the medical doctor’s arrest and conviction in March. At trial, Piland didn’t stand a chance. Snow said her dad’s first mistake was to represent himself in court and take on Assistant District Attorney Alex Bass head-on.

“He was super content to go to court to share his knowledge of medical cannabis and let the chips fall where they may,” Snow said. “But, unfortunately, he couldn’t find a lawyer that wasn’t intimidated by Bass’s trumped up charges and that was willing to fight for him, so he resorted to representing himself, which had disastrous consequences.”

Snow said that instead of charging Piland with possession of marijuana, a misdemeanor in the State of North Carolina, Bass decided to charge him with trafficking heroin. Here is what Snow said was found by police when they searched Piland’s home:

“What was found: A 2009 half-full bottle of Percocet/Oxycodone in my grandmother, Lillian Piland’s name, that my dad had failed to dispose of/recycle properly. A single full bottle of Duramorph, belonging to my grandfather, but this wasn’t a charge or used in court as the bottle was full. A few poppy seeds were gifted from my uncle, my mom’s brother, who is a landscape architect and gardener.”

According to Snow, Bass used the Percocet belonging to Piland’s deceased mother and the fact that a home daycare was located nearby to throw the full weight of the law against her father. She said the fact that he was in possession of several pounds of marijuana was never presented in court, making the cannabis activist seem like a heroin dealer and not the curative shaman that he was.

“I don’t know why my dad kept the old pharmaceutical pills, but he tended to be kind of a pack rat or just not be bothered by the little things,” Snow said, noting that one of the key pieces of evidence used against her father was something he didn’t realize he had. “Dad says he didn’t even remember having them as they were found in the back of a drawer.”

Snow said Dr. Piland was naive when he went to trial thinking, that if he just told the truth about his cannabis activism, no jury would convict him.

“After the search and seizure of his house, I think my dad really thought he had a chance to lay his life’s passion and work all out there. I think similar to say, Caitlyn Jenner, somewhere inside he just didn’t want to hide anymore, knowing what he knows and being the ripe age of 70. He was super content to go to court to share his knowledge of medical cannabis and let the chips fall where they may.”

After the prosecution presented its case, and without his own legal representation, the jury took less than 30 minutes to convict Dr. Piland of trafficking heroin—presumably due in part to his possession of 58 grams of poppy seeds. Here’s what about twice that amount looks like:

Snow told The Free Thought Project that she wishes her father had been given a plea deal, but said the prosecutor knew he could easily get a conviction, due to the fact that the senior citizen was choosing to represent himself. As a result, the physician’s daughter now views her father’s conviction with disdain, and especially resents ADA Bass who she says lied about her father and mischaracterized him.

“DA Alex Bass stated my dad had ‘a large cache of dangerous and highly addictive opioid drugs for sale and distribution’ and he knows this is a lie. The truth is only a SINGLE nearly decade old forgotten pharmaceutical bottle belonging to my deceased grandmother and the happenstance of living near an unmarked daycare was used as evidence for sending my non-violent father to prison for life.”

The teacher and daughter of a marijuana activist now accuses prosecutor Bass of sending an innocent man to prison and says he knew full well Piland was no heroin trafficker.

“Bass’s decisions were not only immoral, but go against many standards that Prosecutors are sworn to uphold,” Snow said. “He knows good and well, without a doubt, as does anyone who looks at the evidence, that opium or heroin selling, trafficking, or usage was not occurring.”

Snow said the punishment does not fit the crime, and she pointed to other cases where people were convicted of trafficking in heroin but received much softer sentences.

Piland’s life story might have been written differently had he resided in a state other than North Carolina. To date, there are 29 U.S. states that have legalized medical marijuana in some form. In fact, in some of those other states, Piland may very well have been able to serve as a certifying doctor for medical marijuana, given the fact that he once held board certification as a practicing MD. But he chose to live in the state he loved, and now has to pay a heavy price for dabbling in marijuana.

Looking at the bigger picture, Piland’s case may serve as an indictment of a justice system and a pharmaceutical industry that will go to great lengths to ensure the truth about cannabis is never told. After all, Piland is a medical doctor who gave up his medical practice to pursue a lifetime of research into cannabis. Unfortunately, anyone who may want to glean from what he knows will have to go and visit him in the Marion, NC Correctional Institute.