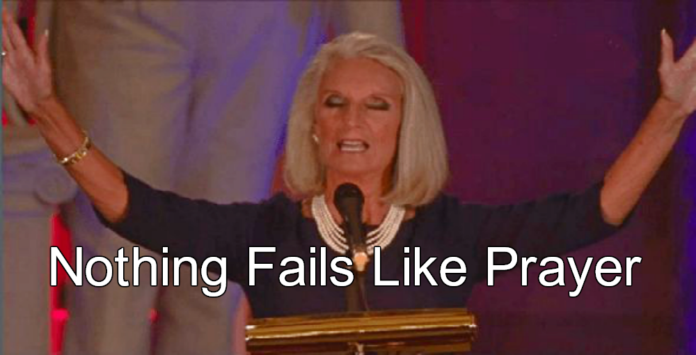 God hates Texas? Leading evangelicals try to turn Hurricane Harvey away from Texas using the power of prayer, and fail.

In a predictable effort, leading Christian evangelicals tried to “command” Hurricane Harvey “to dissipate in the name of Jesus.” However, Harvey refused their request, as did their imaginary God, and the dangerous storm slammed into southern Texas, forcing residents to flee.

Here’s a sample of the failed prayers from deluded evangelicals-

Hurricane Harvey is expected to bring catastrophic flooding and severe storm damage to the coast of Texas. As we wait for the storm to hit, we are positioning supplies and planning to bring immediate assistance to affected families. Most importantly, we are praying for God’s protection for those in the storm’s path.

Anne Graham Lotz, Named by The New York Times as one of the five most influential evangelists of her generation:

We remember when You watched Your disciples struggling in the storm on Galilee, then walked across the water, climbed into their boat when they called out to You and commanded the wind and waves to be still. And they obeyed! As Hurricane Harvey threatens the Gulf area, we are asking You to look on the residents of the Gulf area. We cry out to You on their behalf. We know that the wind and the waves still know Your voice. Command them to be still. Please. For the glory of Your great name.

I call the intercessors and prayer warriors to declare and decree that the fury of this storm be dissipated. We declare that the apex be diverted, that the turbulent forces of the storm turn upon themselves and the four winds of heaven compress it, suppress and depress it! God of Elijah, declare yourself and show your majesty to all the earth! In the name of the Lord who calms the storm, Jesus Christ be glorified.

Father, in the name of Jesus we go on the offensive against the forces of nature and cry out to you to still the storm and provide safety for all your children. All are your children. In the authority of Jesus, with hearts that are clean, in humility, and in total surrender to you, we take the authority you have handed to us and we say, “Storm be still!” You have told us that is two of us agree on earth concerning anything we ask, it shall be done (Matt. 18:19).

Despite the sincere (and insincere) prayers and pleas, Hurricane Harvey made landfall near Corpus Christi, Texas, on Friday evening. The New York Times reports on the Category 4 hurricane: