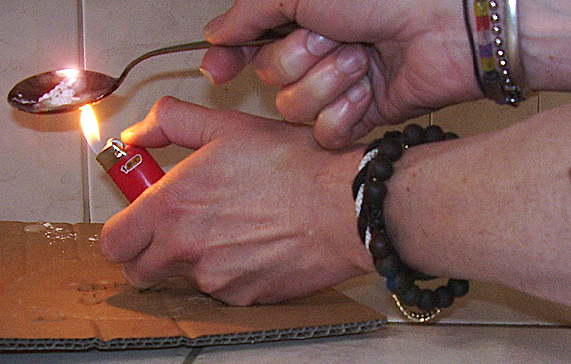 The war on drugs has often put the face of an addict as being “poor minority, and male”. When the image of a junkie was that of an “unkempt, unemployed, black guy, sprawled out on a pile of trash in an alley
” the onus was on the individual to “Just say no” and no extension of compassion to these folks was considered. Poor people of color were told to simply abstain from the drug, and their addiction was met with criminality. Now that the face of heroin has changed to white and middle class, it is now suddenly an epidemic to be treated, and not with a jail sentence, but with empathy and compassion that their minority counterparts were never privy to. So why the double standard?

A. J. Solomon, the son of state Supreme Court Associate Justice Lee Solomon, also attended the meeting. The younger Solomon, once a member of the governor’s staff, spoke of his heroin addiction after “becoming hooked on painkillers” and then moving to heroin because it was cheaper and easier to get.

There has been a successful campaign which completely changed the face of the heroin addict from poor, minority and male, to middle-class and white, male or female.

Crack cocaine, heroin, “wet”, and other opiates were allowed to decimate urban communities and destroy families. So many addicts were arrested for crimes  committed while trying to obtain drug money that the government allocated hundreds of millions of dollars for new prisons. Then they filled them.

It is believed by many that societal ills that often flourish first in the black community will eventually spread to the white community if left unchecked and unchallenged. That is what happened with heroin and other opiates. There was no “epidemic” when it was ripping apart families and killing users in Newark, Camden, Jersey City, and Paterson. But now, suburbanites have developed a taste for easily available, cheap, potent heroin.

Why are black lives expendable, and white lives worthy of saving?

In 2015, it was reported that 90 percent of all opioid and heroin users who died of related causes were white, and 8 percent were black. Anyone who believes that race is not the most important factor driving this new heroin treatment push is lying to himself.

Georgetown University Prof. Michael Eric Dyson was absolutely correct when he said of drug addiction, “White brothers and sisters have been medicalized while black and brown people have been criminalized.”

So now, according to our governor, we are confronted with a “heroin epidemic.” Heroin deaths have reportedly surpassed murders and automobile deaths in our state and, graciously, the governor proposed an added $1.7 million for counseling support to those in recovery, and another $100 million to increase access to mental health care and substance abuse treatment.

It’s a very good start, but here is my fear:

The face of heroin addiction has now been sanitized from poor, lazy, black “junkies” to white suburbanites who accidently got hooked on pain killers and then substituted heroin because it was cheaper. Often, this is an accurate portrayal of events, but sometimes it is not.

This shaping of perception by presenting a compassionate, accidental path to addiction goes a long way in validating public policy. Today, heroin use does not mean that one is morally corrupt or criminal, as it did previously for black addicts, many of whom are still incarcerated.

The thinking today is that we should offer treatment because addiction is an illness. If this is true, why wasn’t it an illness when the black community was being torn apart and tens of thousands of people were sentenced? This inequality, not only in the criminalization of black addicts, but in the decriminalization of white addicts, is bad. Even worse, since it is a bigger slap in the face, is now that more middle-class suburbanites are affected, hundreds of millions of dollars and expertise to assist them became available with practically no dissent.

This is a very clear example of the black community not having the political power to influence public policy, and of the white community being heard and exerting its influence to save their children.

What do you think about the decriminalization of addiction only coming to be once it was a matter that affected the white middle class? Is it because we are truly learning about the complexities of addiction, or it is soley based on race, having devalued minority lives over those of their white counterparts? What should become of those addicts whos woes landed them in jail instead of a treatment facility- would that mean sentences shouls be overturned for all if addiction to herion and like drugs is truly an “epidemic”? Join the discussion in the comments below.

Over 3 Years Without Clean Water