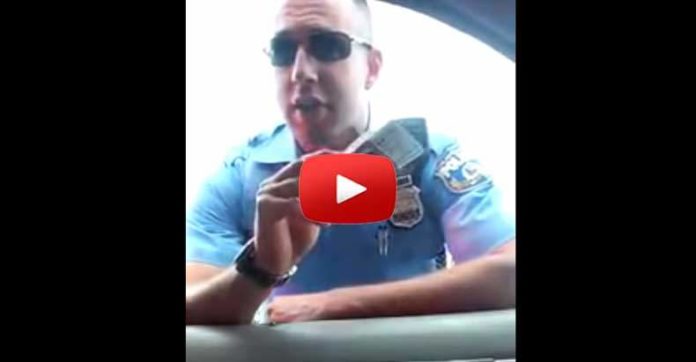 Philadelphia, PA – A driver got a big break and a great video when a cop gave him an ultimatum—”buy these show tickets or I’ll take your car.”

The apparently hidden camera captures the Philly officer extorting the driver for cash, and incidentally helping the driver as well.

“You and your friend got any money to buy these Hero Thrill Show tickets?  Support your police department? $10 each man.  Either you buy these…or I take your car because it’s unregistered.”

The driver instantly complies, pulling out some cash for the cop.

“Pay there?” the driver says.

“No, no, no.  You already paid.  You got these tickets, man.  Go support the police department.  Support cops like me that, instead of taking your shit, you two walking, just buy these Hero Thrill Show tickets.  That’s it,” says the cop.

The tickets were for a fundraising effort for children of police and firefighters killed in the line of duty.

Another male passenger was in the car.  After asking the driver if he has a sweetheart, the cop decides to make them buy three tickets instead of two.

The driver, realizing he has to buy three tickets now, says, “$30?  I don’t want to take this guy [passenger].”

The cop responds, “Well, let him buy it too or else I’ll take the shit.”

It could be the case that this is not an isolated incident, and more Philly cops are in on the scheme to support the fundraiser.  It certainly seemed rehearsed.

What would you do in this situation, besides filming the encounter?  Could he be considered a good cop for avoiding the punishment of seizing someone’s car, or is he a bad cop for not following the rules and extorting someone for cash?