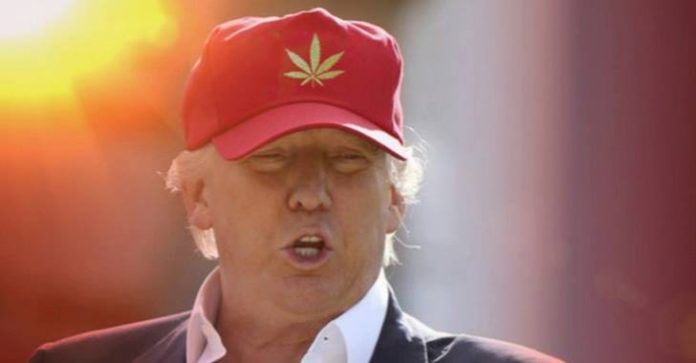 Cannabis legalization advocates are planning to hand out scores of free weed at President-elect Donald Trump’s upcoming inauguration. Marijuana activist group DCMJ intends to distribute 4,200 joints to be lit up, appropriately, at 4:20 pm on January 20 at the Trump inauguration. They are calling the protest an act of civil disobedience; though cannabis is currently legal in the nation’s capital thanks, in part, to the efforts of DCMJ, it remains illegal on federal property like the National Mall, where the inauguration will take place.
The activists hope to pose a challenge to the incoming president on marijuana policy, unless “President Trump comes out now in support of full cannabis legalization in all 50 States and DC!”
For now, DCMJ founder Adam Eidinger says, “The main message is it’s time to legalize cannabis at the federal level.”
The protest comes even as the incoming president has expressed a degree support for legalizing the plant. In an appearance on Fox News last year, he revealed his acceptance of medical marijuana. “I’m in favor of it a hundred percent,” he said. He has also said full legalization should be a state-by-state issue, siding with state’s rights rather than overarching federal authority, which still asserts cannabis is a dangerous drug with no medicinal value.
Still, Trump’s views are murky at best. He has also said recreational cannabis is “bad” and criticized the state of Colorado, which legalized weed in 2014. Expressing support for state’s rights and medical use, he still took a jab at full legalization. “If they vote for it, they vote for it. But they’ve got a lot of problems going on right now in Colorado. Some big problems. But I think medical marijuana, 100 percent,” he said (overall, full legalization in Colorado has been successful).
Trump’s lack of clarity on the issue is exacerbated by his decision to appoint Alabama Senator Jeff Sessions as attorney general, a move that has sparked concern among supporters of legalization. Sessions claims “Good people don’t smoke marijuana.” He thinks it is a “very real danger” and argues it is “not the kind of thing that ought to be legalized.” Sessions believes marijuana reform is a “tragic mistake” and has criticized current Attorney General Loretta Lynch and FBI Director James Comey for not enforcing federal law aggressively enough.
Eidinger views this as a threat to progress. “We are looking at a guy who as recently as April said that they are going to enforce federal law on marijuana all over the country. He said marijuana is dangerous,” he says.
In spite of Sessions’ archaic views on a plant that is increasingly proving to have medical benefits, experts are optimistic Trump will not take his attorney general’s lead.
“For the most part, experts all think we will see a continuation of some form of the status quo,” says Chris Walsh, editor of Marijuana Business Daily. He explained:
“Maybe there will be some efforts to crack down here and there, but the consensus is that a widespread crackdown will be difficult. If Trump’s going to attack the marijuana industry—like the recreational side, or the new states that legalized—it’s going to be very difficult for him to do that. He’s going to have a very hard time unwinding all the time and money and effort that states have put into these programs.”
Though Trump’s camp declined to comment on upcoming cannabis policy, the growing trend of legalization shows no signs of stopping. Twenty-eight states in the country have already legalized marijuana in one form or another, making it doubtful Trump will put up a serious fight. Further, as Yahoo News points out:
“Trump also campaigned on a platform of creating jobs, and the legalization of marijuana in many states—both medical and recreational—has done that. If Trump wants to be seen as a job creator, taking aim at the marijuana industry wouldn’t make much sense; better to help continue its growth or do nothing to stop it.”
Though Americans’ support for legal weed continues to grow, roughly 40% of the country still opposes it, making the issue a political tight-rope walk. Throughout his presidency, President Obama also attempted to walk that line. In the first few years of his administration, the number of federal raids on medical marijuana dispensaries outpaced those waged over the duration of the Bush administration. As the current president’s time in office wanes, however, he has softened his stance on prohibition, commuting the sentences of hundreds of nonviolent drug offenders, including those imprisoned for cannabis.
With agencies like the DEA and FDA continuing to block progress on reform — and the incoming attorney general openly indignant about legalization thus far — it seems the protest should extend beyond the incoming president to the federal government as a whole.
To start, however, D.C. cannabis activists simply want to remind the new president that the times are irrevocably changing.
“We legalized cannabis in Washington, DC,” they say on their website, “and we are not going to let anyone take that away from us! This is an outreach opportunity to show President Trump’s supporters we are the marijuana majority! Join us for smokin’ fun time!”
He asserts the demonstration is not “anti-Trump” and says all are welcome to join. As USA Today reported, he is “hopeful the new administration will not be a problem” but says DCMJ is “preparing for the worst.”
As such, they are willing to break the law on Inauguration Day and are inviting thousands of others to join them. “We are going to tell them that if they smoke on federal property, they are risking arrest. But, that’s a form of civil disobedience,” Eidinger says. “I think it’s a good protest. If someone wants to do it, they are risking arrest, but it’s a protest and you know what, the National Mall is a place for protest.”
(Article From The Anti Media)