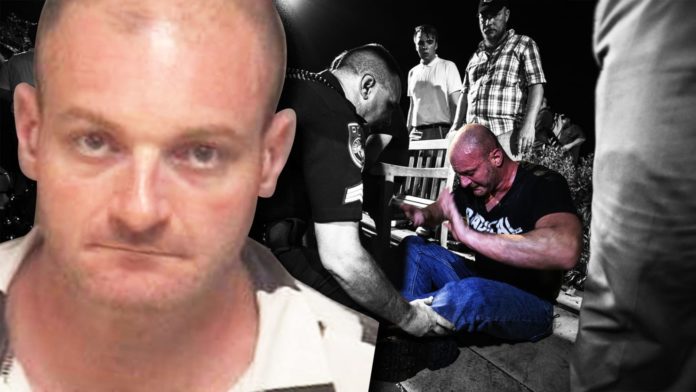 White Supremacist Christopher Cantwell had his first post-arrest interview with Hawes Spencer of The Daily Beast. It turns out that he really hates his new “Crying Nazi” nickname.

After discovering he had arrest warrants for his part in the Charlottesville, VA violence, he made a video where he cried about it, and the internet mocked him relentlessly.

Raw Story reported Cantwell was featured in a Vice News documentary made by journalist Elle Reeve. He showed off his arsenal of assault weapons and pistols, stripped off his shirt, said he’s part of a movement aimed at “normalizing racism” and that his ideal president would be someone like Trump, but “even more racist.” Someone like Donald Trump, he said, but “who does not give his daughter to a Jew.”

“I don’t think you could feel the way I do about race, and watch that Kushner bastard walk around with that beautiful girl,” he said in the documentary. A much different person than he was in the video where ha cried over having arrest warrants.

Cantwell says the felony violence charges currently leveled against him are as a result of action he took in self defense when he was attacked by a counter-protester. Of course the video and picture evidence disagrees.

“That guy is coming directly at me, and I’m spraying him directly in the face,” says Cantwell. “I used the least amount of force possible to prevent that man from harming me in a brawl that my enemies started.”

He also blames the police for his own actions, again contradicting the video evidence of the incident.

“They pushed hundreds of armed white nationalists into a crowd of communist rioters who threw rocks and piss and shit and bleach and pepper spray and hit us with clubs and did everything they could to provoke us into shooting them.”

Emily Gorcenski — who was in Charlottesville on Friday night as an anti-racist counter-protester — said that Cantwell is lying. She was one of the people who joined hands to protect a statue of former President Thomas Jefferson from the torch-wielding marchers.

“It was 300 against 30, and they had us surrounded,” Gorcenski said. “If anyone has a self-defense claim, it’s us who were at the statue.”

Cantwell said Gorcenski’s testimony wouldn’t be accepted in court because she’s a “f*cking tranny” and that the whole push to remove Confederate monuments is a Jewish conspiracy.

“All of these people [statue removers] are taking their talking points from Jews,” he said.

Cantwell is facing up to 20 years in prison andnis currently being kept in solitary confinement for his own safety from other prisoners. He has been denied bail and his next court hearing is scheduled for early October.

Georgia Lawmaker Warns Black Attorney She ‘may go missing’ If She Tries To Remove...