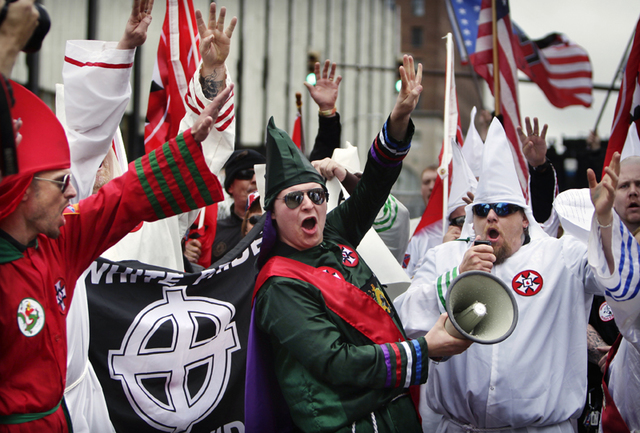 Another KKK leader publicly announces he has no sympathy for the girl killed in a domestic terrorist attack in Charlottesville, VA over the weekend.

Justin Moore, a man who identified himself as the Grand Dragon for the Loyal White Knights of Ku Klux Klan claimed Heather Heyer deserved to die in the attack on counter-protesters at the “Unite the Right” rally, reported WBTV.

“I’m sorta glad that them people got hit and I’m glad that girl died,” Moore said in a voicemail to WBTV. “They were a bunch of Communists out there protesting against somebody’s freedom of speech, so it doesn’t bother me that they got hurt at all.”

Moore went on to say that he thinks “we’re going to see more stuff like this happening at white nationalist events.”

“We were out there and I seen a lot of communist flags and anti-fascist and we’re going to see more stuff like this,” Moore continued. “White people are getting fed up with the double standard setup in America today by the controlled press.”

Moore’s Klan chapter is based in Pelham, NC, and some of its members were in Charlottesville over the weekend for the rally.

The voicemail for their chapter praises James Alex Fields, Jr., the 20-year-old Nazi terrorist who killed Heyer and wounded dozens of others when he plowed through a crowd of counter-protesters Saturday.

“Nothing makes us more proud at the KKK than we see white patriots such as James Fields Jr, age 20, taking his car and running over nine communist anti-fascist, killing one [expletive]-lover named Heather Heyer,” the recorded message said. “James Fields, hail victory. It’s men like you that have made the great white race strong and will be strong again.”

Moore was not the only KKK leader to support the terrorist attack.

“When a couple of them die, it doesn’t bother us,” Imperial Wizard Chris Barker said. “They’re always attacking and messing with our rallies.”

Barker went on to blame a lack of police presence for the problem rather than put the blame on the ones causing the violence.

“They should have never the anti-facist…that’s like putting the Klan and the Black Panthers in a room together,” Chris Barker said. “We’re gonna try to kill each other. The police should have known the anti-fascist is the sworn enemy of any white separatist.”