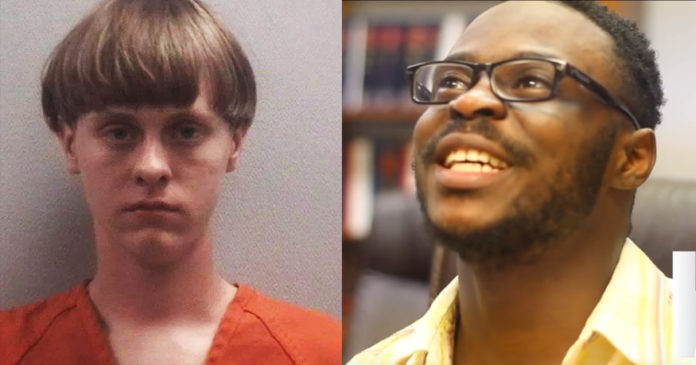 On June 17, 2015, white supremacist Dylan Roof carried out one of the deadliest hate crimes in recent American history. He opened fire at Emanuel AME Church during a Bible study, killing nine black congregants.

On August 3rd, 2016 at Charleston County Jail, Dylan Roof was let out of his cell to take a shower at 7:45am on a Thursday. Officers checked the surrounding cells to make sure everyone else was locked down. Inmate Dwayne Stafford “escaped” his cell and ran down the stairs to assault Roof. Stafford struck Roof with a closed fist.

In the interview with Black Collective seen in the video below, Stafford credits divine intervention:

I feel as if he should get beat up every day.

How I feel caused God to have me get out that cell. There are other people in that unit who could get out their cells any time they want, if they did certain things. I didn’t do certain things.

Dwayne Stafford was released on bond after donations poured in for him following his jailhouse assault on Dylan Roof.

Stafford was in custody for charges of armed robbery and lying to police. The bond for Mr. Stafford was set at more than $100k.

He makes no apologies for beating up Roof, stating, “He ain’t crazy. He just evil.”

Do you support the action Dwayne Stafford took?

Divine intervention, or were the jail guards in on it?

Should Roof ‘get beat up everyday’?