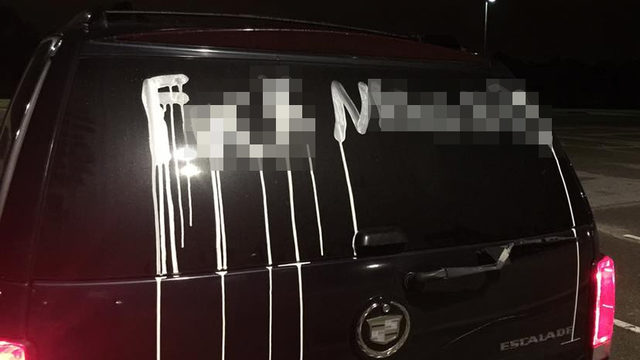 A Tennessee teenager has apologized after painting a particularly nasty racial slur on two cars, including one vehicle belonging to a local pastor.  Seeing this, there isn’t really a non-racist way to take it, but he insists “it wasn’t supposed to be racist.”

The 13-year-old, who is in middle school, was arrested after the incident, expelled from school and now faces charges of vandalism, as well as a felony charge of civil rights intimidation, in the Shelby County Juvenile Court. He and another juvenile (who faces the same charges) stand accused of tagging two cars with the slurs.

He spoke with Fox 13 Memphis about the incident to apologize and tell his side of the story.

“I regret it so much. I want to say I am sorry to the pastor and to the other person,” the unidentified teen said. “I didn’t mean to put anybody through this. I never did, and I feel so bad.

“I have learned to never mess with anyone racially or do anything to that stupid extent, or do anything bad. I should just stick to school and be a good kid,” the teen added.

When asked why such a thought would even enter his head, the teen said it was meant to be funny, not racist.

“It was just something stupid that we thought would be funny, but it didn’t turn out to be funny at all,” he said. “It wasn’t supposed to be racist.”

Jason Mitchell, who is the pastor of Perfecting Love Community Church, found his car vandalized after parking his vehicle in the parking lot of Collierville High School on Sunday. When he returned to his vehicle, he found “Fuck Niggers” painted on the back of his SUV. He posted about the damage to his car on Sunday, quipping, “Y’all believe it’s real yet?!?!”

The 13-year-old’s father, who says he is furious and embarrassed by his son’s actions, said that his son sometimes makes bad decisions, but echoed that he is not racist.

“My son is not a racist. Sometimes he makes bad decisions, and this was the worst decision he has made in his life so far,” said the father, who also declined to be identified.

Watch the Fox 13 report below:

Police Murder Father Of A Daughter That Was Hit By A Cop Speeding On...