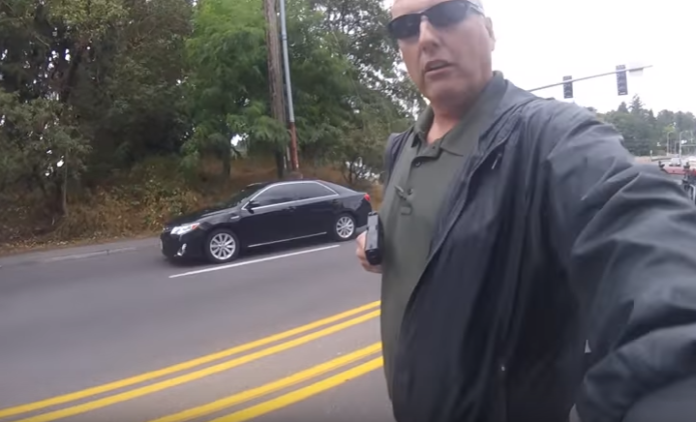 A detective with the King County Sheriff’s office has been placed on administrative leave after a video surfaced showing him needlessly pointing a gun at a motorcyclist during a traffic stop.

A Tuesday Facebook post from Sheriff John Urquhart said he was made aware of the video on Monday and was disconcerted by what he saw in the video made Aug. 16 by motorcyclist Alex Randall, reported The Seattle Times.

Watch the disturbing video below, which at first seems to be more of a carjacking:

“With the caveat that I have not yet heard the other side of the story, I was deeply disturbed with the conduct and tactics that were recorded,” Urquhart wrote in the post.

He said the department’s policy manual states that firearms are not to be drawn and pointed unless the deputy believes their use may be required. In this case it was clearly NOT required.

“Drawing your weapon on someone when investigating a misdemeanor traffic offense is not routine,” Urquhart wrote.

Randall posted the video on YouTube with an introduction that said, in part: “This video shows the boldness of the King County Sheriffs Deputies and lack of fear of repercussions in threatening and intimidating an unarmed citizen with excessive use of force.”

The video appears to have been recorded from a helmet camera. It starts with the motorcyclist pulling up behind other vehicles at a stop light, seemingly unaware there is a police car behind him.

The plain clothed detective then appears, on foot, on the rider’s left side with a handgun tucked in tight to his chest and pointed at the rider.

The officer does not identify himself as he stands there pointing the gun. He seems to startle the motorcyclist, and says, “How ya’ doing?”

The rider curses, and then says, “What are you doing to me?”

“What do you mean what am I doing?” the detective replies, STILL not identifying himself as a police officer. “You’re (expletive) driving reckless. Give me your driver’s license or I’m going to knock you off this bike.”

“I will pull over. I am unarmed,” the rider said.

In the exchange that follows, the deputy repeatedly asks the rider for identification, threatens to “dump” the bike if it’s moved and then takes the rider’s wallet from his left pocket, STILL not identifying himself as a cop.

The rider tells the deputy several times that he cannot hear through the helmet and asks for permission to move the bike off the roadway, turn it off or take off his helmet.

The officer only tells him he is a cop after reaching into the motorcyclist’s pocket and taking his wallet.

“I’m sorry. You have a gun drawn on me, so I’m a little panicked,” the rider says.

“Yeah, you’re right, because I’m the police,” the deputy said. “That’s right. When you’re driving and you’re going to place people at risk at 100 mph-plus on the god-dang roadway.”

After looking at the rider’s ID, the deputy puts his gun away, says he’s with the sheriff’s office and then tells the rider that reckless driving is “an arrestable offense.”

The rider added a message to the end of the video, saying that the detective exaggerated his speed. He also said in a tweet that Urquhart had called him to discuss the video after seeing it Monday.

Urquhart said the incident will be thoroughly investigated. The deputy’s name has not been released by the sheriff’s office.