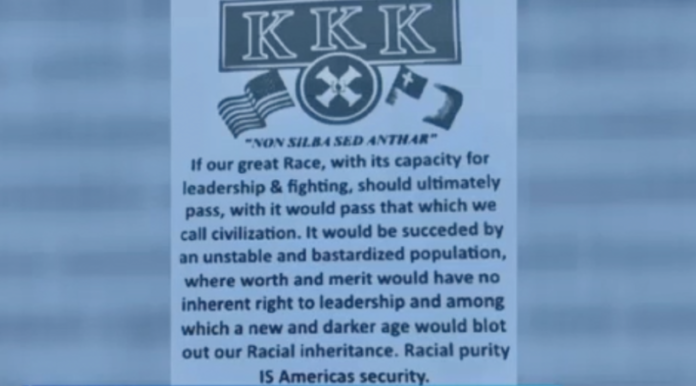 The KKK has sized the opportunity of the violence in Charlottesville, and the quiet support of President Trump, to ramp up their advertising and recruitment. Police say packages containing Ku Klux Klan flyers were left homes in a suburban Cincinnati township.

WKYC reported that Green Township police say employment guides in orange plastic wrappers were dropped on driveways this week. The guides had a message from the KKK taped inside that included statements such as “Racial purity is America’s security.”

“I’m just amazed and shocked that would be in something that’s on the end of a driveway,” Tracy Noel told Fox 19. “I just can’t believe that. Honestly, a lot of times, I just throw those things away, just because usually they’re kind of garbage anyway, so I don’t know that I would have looked at it. I can’t believe they would allow something like that in a flyer. It’s ridiculous and very disturbing,” she added.

Police say they are not investigating the action as a hate crime. They say the messages are protected as free speech under the U.S. Constitution.

Authorities say they did receive several calls from upset residents.