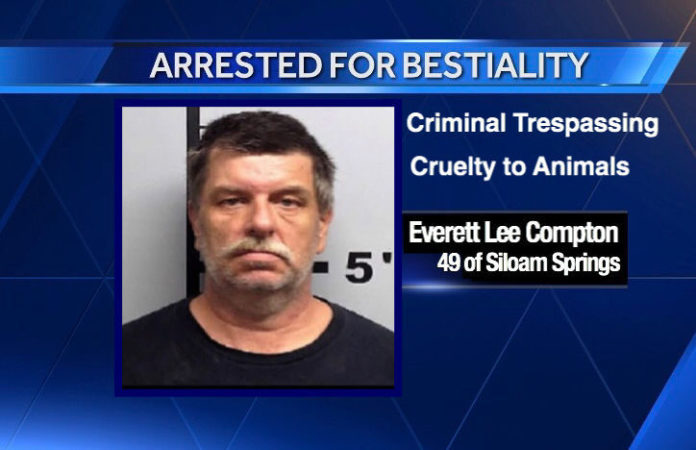 After being caught on camera, an Arkansas man is accused of bestiality against someone else’s pet donkeys on multiple occasions.

The donkeys’ owners told police they’d been having trouble with people harassing their pets for 3 years, according to court documents. The owners set up a game camera to catch intruders, and they definitely caught a bad one.

The camera captured several images on May 27, June 4 and July 5 of Compton feeding a donkey carrots, then covering its eyes, police said. The footage also shows him standing behind the animal and appearing “to have some type of sexual interaction” with the donkey, according to the report.

The homeowner called police around 1:30 a.m. July 16 to report the man was in the field again.

Siloam Springs police apprehended Compton after he was caught having sex with another donkey on the same property, according to the documents. After officers spotted him in the bushes, he claimed he was only taking a walk.

The police report states that the officer asked him about the donkeys, and Compton replied that he gave them carrots but did not have sex with them, but after he was told there was video, he said that marijuana “makes him do sick things,” reported Arkansas Online.

Compton is being held at the Benton County Jail on a $5,000 bond. He has a hearing set for Sept. 11 in Benton County Circuit Court.

This Florida Sheriff Said Blacks Should Act Like Whites To Survive And Obama Was...