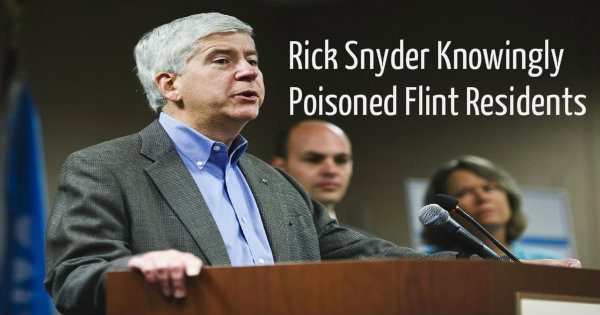 Although it was quite obvious from the beginning, it has been confirmed that Governor Rick Snyder and his administration knowingly poisoned Flint, Michigan residents. The information found is actually quite disturbing. The Synder Administration was dismissive to the monstrosity of complaints they received from residents about the brown water they were expected to shower and bathe with, cook and clean with and drink. They went so far as to try to cover up the facts by misrepresenting data about the water. Synder received an email from an Environmental Protection Agency expert, Miguel Del Toral, stating that “the state was testing the water in a way that could profoundly understate the lead levels.” The administration has been playing the clueless role and trying to shift the blame ever since they have started receiving national attention.

A hospital and a University stopped using Flint water because it was damaging their instruments. A General Motors factory stopped using Flint water because it was corroding the metal in their cars. Water so toxic that it is corroding metal and no one does anything? The Governor and his administration are playing with people’s lives and essentially killing people and we are worried about whether he will resign? We should be asking ourselves, why hasn’t the entire administration been incarcerated?