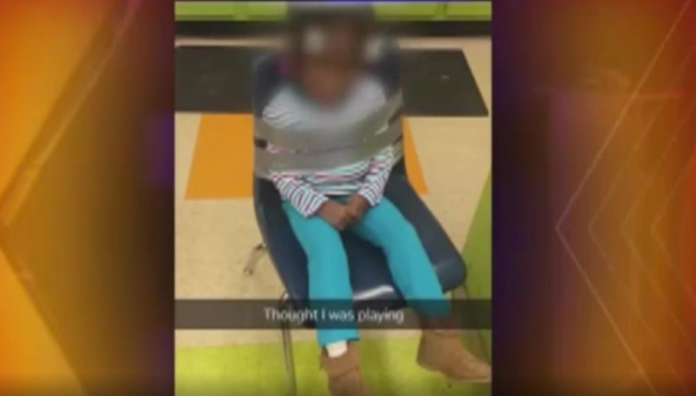 The parents of a 4-year-old Missouri girl are demanding answers and accountability after they were shown a picture of their daughter duct taped to a chair at her daycare.

Elysha Brooks and Christian Evans, the girl’s parents, said that they were unaware that anything was wrong until they were actually contacted by the Department of Children and Family Services and sent a picture showing their 4-year-old daughter taped to a chair, reported WBRC.

“I’m looking at a picture of my daughter duct taped to a chair, and her facial expression, I can just imagine how she felt,” Brooks said.

Brooks said she believes the picture was taken while her daughter was a student at Little Learners daycare in Florissant, Missouri.

Brooks and Evans are fighting to shut down the daycare so that another child will not have to face similar treatment.

“I won’t be happy until that daycare is shut down, for one, and whoever did this to my child, whoever it is…she needs to be in jail,” Evans said.

“Seeing your child duck taped to a chair, seeing the anxiety, seeing how scared your kid is, knowing for one that you’re not there to protect them and knowing for two that you have people around that would stoop to that level to hurt your child puts you in a crazy mind state,” the upset father added.

The investigation is still in progress, and Brooks has some advice for parents who send their kids to daycare.

“Double check on these daycares before you go to them because I thought my daughter was safe,” she said.
WBRC FOX6 News – Birmingham, AL
(Article By Jeremiah Jones)