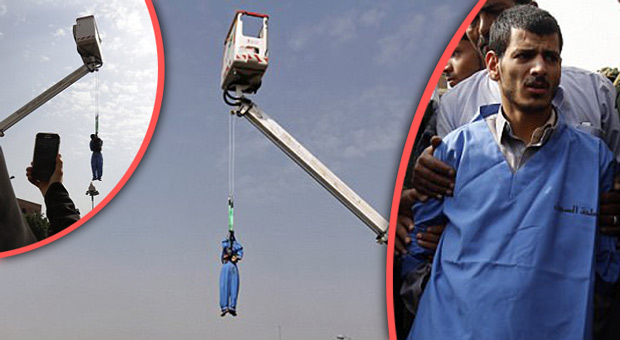 A man who was captured after he had raped, murdered and buried the body of a 4-year-old girl has been publically executed for his crimes.

Hussein al-Saket was shot 5 times and hung from a crane during an execution in a public square as citizens cheered on and filmed the event on smartphones.

This is the second such display in less than a month in Yemen’s rebel-controlled capital Sanaa.

These public executions are seen as seen as a huge display of power by the Shiite rebel group that has been in control of the city since the 2014 military coup.

Just last month, another man was captured and killed by machine gun fire in front of a large crowd for similar pedophilia crimes.

A policeman shot him dead through the back with five bullets aiming for the heart, before his body was strung up on the end of a crane.

On July 31, another man was executed in the same square after being convicted of raping and murdering a three-year-old girl.

Both executions have been framed as an example of the Shiite rebels’ efforts to combat crime in their areas.

People cheered and filmed the execution on smartphones

The Iran-backed Houthis have been locked in war with the Saudi-backed government of President Abedrabbo Mansour Hadi for more than two years.

More than 8,300 people have been killed and millions displaced in the conflict, while some 2,000 have died of cholera since April.

The United Nations has described Yemen as ‘the largest humanitarian crisis in the world,’ with 10 million civilians in acute need of life-saving aid as the country teeters on the edge of famine.