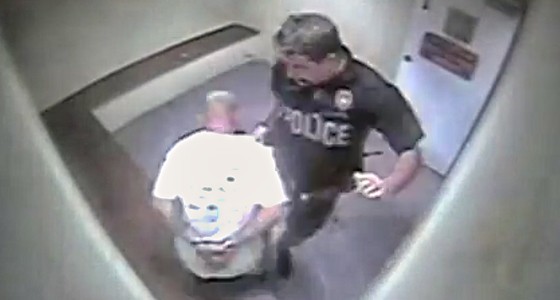 A man who was a victim to brutal police brutality is still seeking the restitution he was promised when an officer had beaten him so severely that he could not work for over 2 years. Rob Liese says he does not want to get rich quick, he is only seeking his lost wages and enough to cover the $75,000 in medical costs he incurred due to the attack. Prosecution relayed to Liese that if he testified they would bring forward the matter or restitution- which over 2 years later has not yet been dealt with.

As Jeff Deal for WFTV writes:

The incident happened in 2014 and was recorded by surveillance cameras.

Officer Peter Delio was seen kneeing a handcuffed Liese in the stomach.

The attack did a lot of damage, Liese said.

“It ruptured my spleen, tore my mesenteric artery (and) tore my stomach lining,” he said.

Delio was fired and Liese said prosecutors promised they would help him with restitution if he testified in the case against the officer.

Liese testified and Delio was convicted of felony battery and was sentenced to 51 weeks in jail.

Once the case was over, Liese said the restitution talks went nowhere.

“It just seems like everyone else got what they needed, so they no longer needed me,” he said.

Liese said his injuries kept him from working for two years and he’s still dealing with the medical bills.

He said he only wants money for the time he had to take off work and doesn’t want to get rich from the case.

Though Liese has since forgiven Delio, rightfully, he is still moving forward with his demands for restitution. This man was victimized not once but twice by systems meant to serve an protect him- the first time at the hands of Derio and secondly by the prosecutors how used him for his testimony. Is there any wonder why faith in law enforcement and our juridical systems continues to falter?

What are your thoughts on the matter? Join the discussion in the comments below.

Black Guy Gets Attacked By Racist White Guy In A Restaurant, It Doesn’t End...