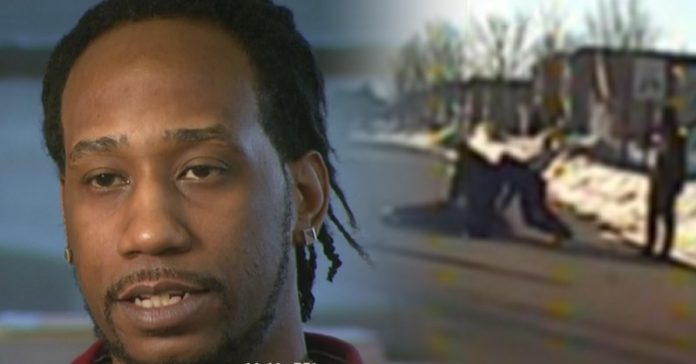 CHICAGO, IL — Every time a video featuring Illinois-based George Taylor is played on public television a significant portion of it has to be beeped because of the explicit language used by cops when they talk to him.

The language contained in the dash cam footage is not fit for the general audience.

So one has to wonder why the Montgomery police department officers, whose words get censored every time, chose to call Taylor and his family a bunch of “fucking n*ggers”.

The cops used the insulting racial slur despite the fact that Taylor’s children were also present in the car.

One of the offending policemen was given a three-day suspension and an out-of-court financial settlement.

It seems those officers learned nothing from the department’s slap on the wrist.

This time adding physical abuse to the name calling.

However, the way things unfolded ,the African-American man almost ended up behind bars.

As it happens, his girlfriend and her son were outside having talking to some policemen when Taylor decided to find out what was going on.

As soon as he stepped out a police officer asked him his name and six seconds later the man found himself pinned to the ground being kicked all the while.

He says one of his teeth was knocked out and the right side of his head was bruised.

To add racial insult to injury, his assailants caught him a ‘nigger’ once again.

Taylor’s lawyer Michael Schmiege says the cops probably did not realize that would be caught on camera second time around.

It certainly did not look like they had planned it that way. The dash cam footage of Taylor’s ordeal was caught on Kendall County sheriff’s squad car.

In fact, Montgomery police accused him of yelling and agitation and even claimed that he did not cooperate.

Taylor’s case was presented before Judge Phillip G. Montgomery, who rubbished these allegations – noting that the police officers only took six seconds to push him to the ground, after asking for his name.

“If I didn’t have that video, I would have been convicted,” says Taylor.

Watch the video below: