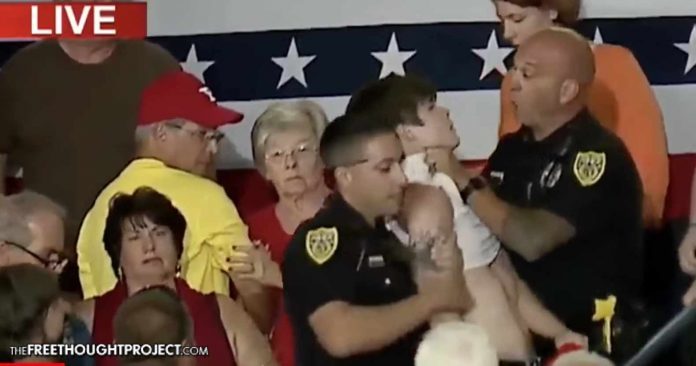 Would these same people praise the police if they assaulted a Trump supporter who chose to hold a MAGA flag up at a Hillary Clinton rally? Not likely, and this is because the two party paradigm blinds people to logic and reason. Emotion rules and as long as their team is winning, the rights and liberty of the other team matter not.

The two party paradigm is so strong, in fact, that it is highly likely that someone reading this right now is likely thinking that since we are calling out this police violence that the Free Thought Project must be on the side of Antifa or Bernie Sanders or Clinton. Laughably, they couldn’t be further from the truth.

TFTP stands for liberty and we stand against those who threaten it — no matter if they champion a donkey, an elephant, a black bandana, a MAGA hat, or even a USSR flag.

In fact, we’ve called out similar situations before — but on the opposite side. In June of last year, TFTP reported on a dire situation outside of a Trump rally in which Trump supporters were violently attacked without reason. During this attack, police stood by and did nothing as anti-Trump protesters spit on, beat, and attacked them.

We also pointed out last year how Clinton operatives were caught on undercover video talking about getting paid to ‘start shit’ at Trump rallies and cause chaos.

Naturally, for reporting on the two instances above we were demonized by the left for being pro-Trump.

Until Americans wake up to the fact that no matter which puppet is in office the police and warfare state grows, we can expect this problem to get worse. Sadly, it seems that divide is at an all time high in this country right now — and it is by design.

As long as zombies cheer on police violence against peaceful people, government can lay waste to our rights and no one cares. As long as people fight over right versus left, those at the top will continue to divide and exploit us with no recourse.

As anger and violence grow among the populace, Americans are doing exactly what those in power want them to do — fight over puppets — while their savings, economy, and livelihoods are fleeced.

It is high time that humans stop fighting over who they want to rule the world, and start fighting against the people destroying it.

The state takes the approach of coercive violence to force compliance, and it’s quite apparent that this approach falls short of its desired result. It’s time to adopt peace as the means to the ends — not just the ends.

In the 20th century alone, governments killed 174,000,000 people as they ostensibly fought for freedom. Where has that gotten humanity?

When hate and violence are used as a means to an end, we end up with people fighting in the streets over who should be the recipient of 30% of their paychecks. Can we not move past this already?

Removal of due process, the initiation of violence, and abuse of power; these are tools of the state, not of the peaceful revolution. Those who would take or harm an innocent life to incite change are no different than the mass murdering sociopaths within the government.

Do not mistake this path with pacifism, as self-defense is the root of all rights, for without it — we no longer exist. However, one cannot force others to change; they will only change when the information strikes them a certain way. The only thing we can have a direct effect on is our own lives.

It’s time we start realizing our true potential as humans and be the change we want to see in this world.

50 Immigrant Women and Children Dumped by ICE at Closed Bus Station in Hurricane...