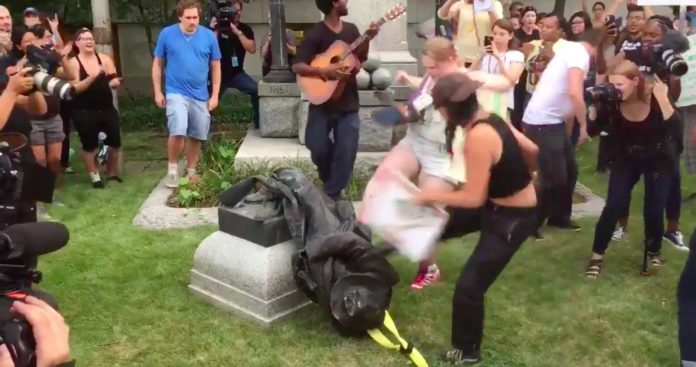 Fed up with the violence and hatred from confederate flag waving white supremacists, a group of protesters in Durham, N.C. tore down a Confederate monument in front of a courthouse in the city’s downtown area Monday, and the entire act was caught on video and posted to Twitter.

The Root reported The video shows a crowd of people gathered on a grassy area in front of statue that appears to be in front of a courthouse. A heavy duty yellow strap is tied to the neck of the statue.

As the gathered crowd chants, “No hoods! No KKK! No Fascist U.S.A.!” a group of people pull on the rope until the statue is toppled from its pedestal. When the statue hits the ground, the crowd cheers, and some people run up to kick the statue and spit on it.

The crowd of demonstrators were part of a planned protest to show solidarity with Charlottesville, VA.

There’s a #Durham protest tonight to stand in solidarity with #Charlottesville. Protesters are meeting near a confederate statue downtown. pic.twitter.com/N2JbjcDuwR

After toppling the statue, the crowd then blocked an intersection in downtown Durham to do some chanting for the people stuck in the stopped traffic.

They then proceed through downtown Durham, carrying signs that decry white supremacy.

These people proved these statues symbolizing slavery, oppression, and racism can be taken down. So what monument is next on the list?