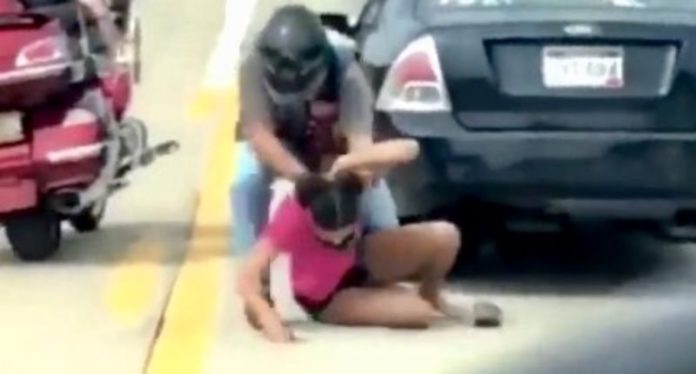 A retired Morgantown sheriff’s deputy has been charged with battery after being caught on video in a violent road rage altercation with a woman.

William Sothen, 63, and Amber Generally, 21, confronted each other verbally after following each other throughout the West Virginia town. Morgantown Police Chief Ed Preston reported that Generally exited her vehicle and verbally confronted Sothen, who was on a motorcycle. Sothen then shut the door of Generally’s vehicle as she attempted to re-enter. He placed his hands around her neck and brought her to the ground as they began to struggle with each other. An off-duty West Virginia University officer separated the two as police arrived on the scene, according to WVAlways.

Generally reportedly sustained an ear injury when one of her earrings was ripped out. She also had a scrape on her leg. Sothen, who is a retired Harrison County Sheriff’s Deputy, turned himself in after learning a warrant was issued.

Preston indicated that both people had the choice to de-escalate the situation before it became physical, but Sothen is the only one being charged.

“I know people around my age — we literally video everything — so I did not think it was going to turn into what it did but I’m happy I captured it all on video so it can be used and police can figure out what happened,” said the 19-year-old who captured the incident. Both Generally and the young woman who shot the video reportedly asked for it to be taken down, but the third-party source who initially leaked it has yet to do so.

Watch part of the altercation below:

‘Using my white privilege for the right reasons’: Florida Woman Beats A Racist