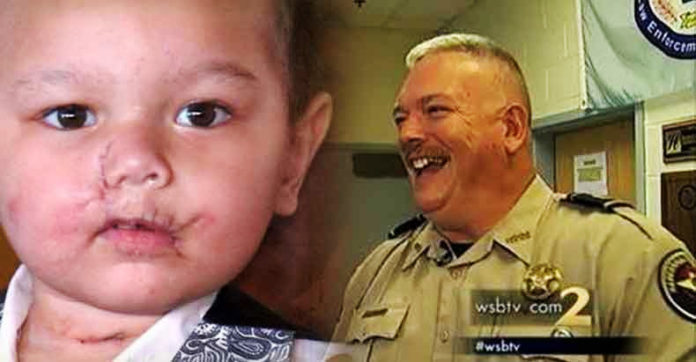 Habersham County, GA — Sheriff Joey Terrell and one of his deputies were shot and injured while responding to a domestic violence complaint that involved another officer.

Terrell has been the subject of a number of reports at The Free Thought Project, because he is the law enforcement official who authorized the “no knock raid” that maimed and nearly killed a young toddler. Terrell then later broke a promise to pay the family’s medical bills when he left them to take care of it on their own.

On Sunday, Sheriff Terrell and Deputy William Zigan were dispatched to a domestic disturbance that involved former Gainesville city police officer Anthony Giaquinta. Giaquinta was recently fired from his job at the Gainesville Police Department, but as of now the reason for his termination is unknown.

When police arrived on the scene, they found Giaquinta’s ex-wife dead in the garage of the home.

The suspect then shot both Terrell and Zigan, then fled the scene and began a search that ended just before midnight, when police found the bodies of two men, including Anthony Giaquinta.

“As EMS and law enforcement arrived, he started shooting at Habersham County Sheriff’s deputies. Two have been wounded. At this point, it doesn’t appear serious,” Capt. Mark Perry with the Georgia State Patrol said in a statement.

It has not been revealed who the other person was, and no details about the circumstances of their deaths have been released to the public.

Sheriff Terrell and Deputy William Zigan are expected to make a full recovery from their injuries.