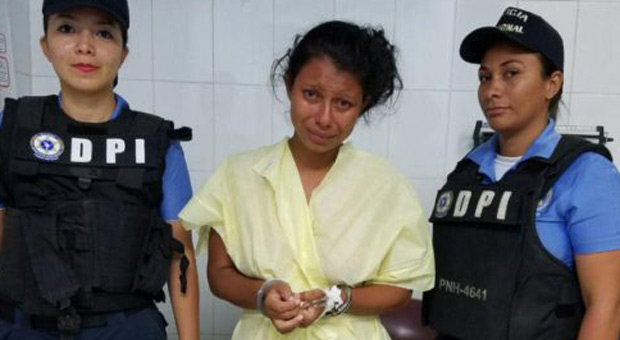 Teenager jailed over stillbirth after being raped by priests

A teenage girl, who had fallen pregnant after being raped by a number of Catholic priests since she was a child, has been jailed for 30 years after her baby was stillborn.

19-year-old Evelyn Beatriz Hernandez Cruz was convicted of “aggravated homicide” in an El Salvador court due to suffering a stillbirth following complications with her pregnancy.

According to Amnesty International, the shockingly severe sentence was due to the predominantly Catholic El Salvador’s “retrograde anti-abortion law”.

Local rights groups say Hernandez Cruz had contracted HIV following her ordeal after she had been raped for years by “a number” of different priests before going into labor, but had not told police or doctors out of fear.

She also said she didn’t know she was pregnant when she suffered severe abdominal pain and fainted in her bathroom before being rushed to hospital in April 2016.

According to MWC News, hospital staff reported her to officials and she was charged after the body of the fetus was found in a toilet.

According to local media, Hernandez Cruz was convicted on grounds that she did not get prenatal care. Prosecutors also argued that the baby may have died after birth.

El Salvador is one of five countries where abortion is criminalized in all cases.

Under the country’s law, which was implemented in 1998, women can be charged with murder and other related charges even when a pregnancy is the result of rape, incest or when the life or health of the pregnant woman or girl is at risk.

A woman can be punished by up to eight years, and in some cases, women have been given sentences of up to 40 years if a judge determines “homicide” was committed.

Politics in El Salvador are highly influenced by the Catholic Church.

“El Salvador’s Catholic-influenced law is causing nothing but pain and suffering to countless women and girls and their families,” Amnesty’s Americas Director Erika Guevara-Rosas said in a statement on Thursday.

“It goes against human rights and it has no place in the country or anywhere.”

Human Rights Watch has also called the law a risk to “women’s life and health”.

Despite the horrific sexual assaults that Miss Hernadez Cruz had suffered, no charges were filed against the priests accused of attacking her.

To date, authorities haven’t questioned anyone of the allegations of rape.

According to the Citizens Group for the Decriminalisation of Abortion (CDFA), Hernandez Cruz’s attorneys plan to appeal the ruling.

“Evelyn has been charged unfairly,” defense attorney Dennis Munoz said, according to CDFA.

“It’s a decision based on morality, not the law or justice.”

El Salvador-based Alliance for Women’s Health and Life documented at least 147 cases where women were charged with crimes under the birth law between 2000 and 2014.

Among them was Maria Teresa Rivera, who was sentenced to 40 years in prison for “aggravated homicide” in 2011 after having a stillbirth in her bathroom. She did not know she was pregnant at the time.

She was released in 2016 after serving four-and-a-half years.

Pressure from women and rights groups has mounted across Latin America for governments to relax religion-influenced laws.

Earlier this year, a bill was introduced in the El Salvador that would change the law to make it easier for rape victims to seek help.

The proposed legislation remains in committee and there has been no decision as to whether it will be sent to Parliament.

A protest against the court’s decision in Hernandez Cruz’s case is being planned.