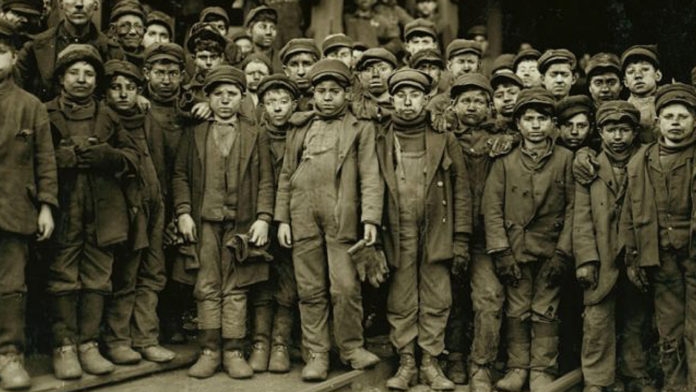 Did you know what white slaves existed in America for the past several centuries as well? While extremely rare compared to African or Native slaves, they did exist.

“In the early 1860s, photographs of children dubbed “white” slaves were circulated as part of a campaign to raise money for public schools for emancipated slaves.

The group was first featured in an engraving of a photograph entitled “Emancipated Slaves, White and Colored” in an issue of Harper’s Weekly in January 1864. According to an article titled “Portraits of Slave Children,” the images were meant to evoke sympathy from wealthy Northerners for potential donations.”

It should also be noted that racists are taking advantage of the history of white slaves. They are making the false claim that300,000 white slaves were traded from Ireland, when total immigration of people from Ireland at the time was only roughly 50,000 a year.

Regardless of what these people cite, history is history. It’s relevant to know the full picture, and the full picture is that slavery has been a general plague on this Earth for an untold number of centuries.

Native people in North and South America, Africans, and others are some of the most notorious people who have undergone slavery because they arguably had it the worst. It would be disrespectful to their ancestors to try and play the game of “which race had it worse,” to try and say white people have undergone the same amount of slavery, but the point here is, slavery is generally a plague on humanity and it’s about psychopathy and power, not race.

In later years, poor whites were treated worse: essentially after the Industrial Revolution.

America’s most prominent academic institutions participated in the condemnation of white people who were considered subhuman. The eugenics movement of the early 20th Century, which has roots in America’s academic institutions considered poor whites and those who went against the grain of “societal norms” to be unworthy of bearing children, and those people were forcibly sterilized alongside blacks, Native Americans, and other people.

To take it a level further, those academic institutions have a lot of strange fraternal orders that go far beyond the archetype of Yale’s Skull and Bones. This documentary is a mind-blowing look at these secret societies:

This might be relevant because it is strong evidence for the fact that all races are equal in the sense that we all deserve prosperity and freedom, and certain people from all races have at one time in history been subject to slavery or other atrocities. Slavery is about psychopathy and classism, the wealthy and the poor, but there is definitely a cultural and historic bias against people such as blacks and Native Americans.

While the plight of African American slaves is obviously more persistent and massive, with unspeakable layers of history on their struggle, it is relevant to recognize that all poor people can be subject to slavery or any other whim of the wealthy, armed class of society at any time: if they are disarmed.

Any people who are physically capable of being forced into slavery, be it unrecognizable debt slavery or all out 19th Century America slavery, can be forced into it if they are unarmed or experiencing a power differential between the “poor” people and the state.

A power differential between the people and the state, or the wealthy and influential people at the upper echelons of society, is really what creates slavery and human suffering. While some races have been subjected to worse slavery than others, we’re all in this together.

The people must be humble, united, and well guarded to avoid slavery in the future.