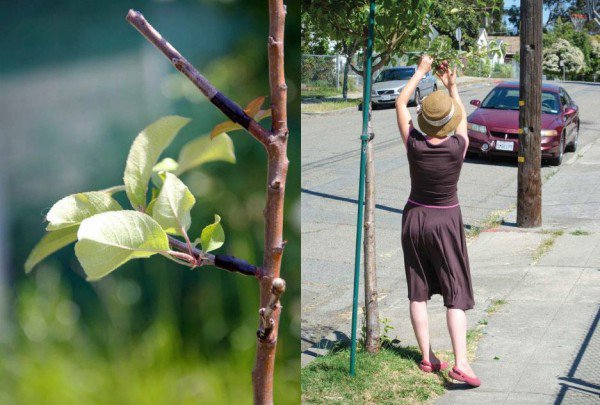 Considering the level of poverty in the city, free access to fruit is a fantastic idea. With no means to afford a decent meal, the homelesss would benefit from this. However, guerrilla grafting is actually illegal.

In many populous areas, urban foresters make it so that the fruit trees don’t grow fruit, in a way to keep fallen fruit from making a mess on sidewalks and attracting animals. Most of the Bay Area fruit trees are fruitless, which guerilla-grafters do not clearly like. City authorities view urban fruit trees as a public annoyance, while agriculture lovers see them as an opportunity to share fruit free for anyone who strolls by.

According to there social media page on Facebook, “Guerilla Grafters is a grassroots group that sees a missed opportunity for cities to provide a peach or a pear to anyone strolling by. Their objective is to restore sterile city trees into fruit-bearers by grafting branches from fertile trees.The project may not resolve food scarcity, but it helps foster a habitat that sustains us.” Their top mission, is to make quality and delicious, healthy fruit available to city residents through grafts. As kind as their actions may be viewed to most of us, guerrilla grafting is considered vandalism and is illegal by San Francisco’s Department of Public Works. It does not matter, if it is a publicly owned tree on a sidewalk, messing with it or altering it is a crime. As of 2012, the Department of Public Works didn’t plan to actively target grafters. “Unless someone is caught in the act, there’s not much we could do,” said spokespersonn Gloria Chan.

She also adds that it is hard to catch the person who grafted a public tree because the average person has no idea what a graft that is illegal looks like. In that case, it’s likely to not be reported at all.

These urban gardeners don’t see the law as a wall from their ability to uphold there mission. “People think of fruit trees as a kind of nuisance,” said Tara Hui, member of the group since its launch five years ago. “The intention of doing guerrilla grafting is not so much for the sake of challenging authority, but to set an example – a working example – to counter the arguments.If we have a prototype, we can have a legitimate rational discussion on the issue.” Every grafted tree has an caretaker, someone who promises to frequently care for and check up on, ensuring it doesn’t cause problems at all. She also added in that many devoted fruit-lovers tried legal ways to begin with.

She had wanted to plant, in front of her house, a fruit tree that she can care for herself. Being able to take care of it herself, she thought she could do the deed. Repeatedly, her efforts were thwarted by the Department of Public Works and the San Francisco nonprofit Friends of the Urban Forest. Instead of planting her own fruit tree, she began to connect with various other residents who were beyond unhappy about the matter. Together, they all wanted fruit trees and by using social media, they were able to delve into other courses of action. 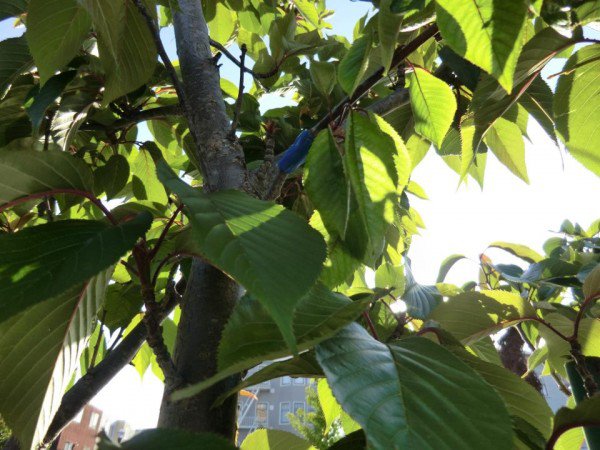 The grafters like to believe their activities as a different means of farming or street decorations. They don’t believe grafts will pose serious threats like slips and damage to the host trees, “With grafts, you only have a few branches that are fruit-bearing, and it’s really very manageable,” said guerrilla grafter Miriam Goldberg.They take the full responsibility required of them to ensure that all fruit is harvested safely. Grafters are also well-prepped to deal with upkeep tasks such as pruning, watering and propping.

“The hope is that through this one small act (of grafting) we can reconnect with a shared space and reconnect with each other,” Hui said. “Ultimately, I think codes and regulations should respond to the reality of people’s lives. Just taking an evening stroll, and then you see a fruit and you reach over and now you’re nourished.”

There’s a web app, that Guerrilla grafters started up to share along tips on grafting and to guide members to find tree that could possibly be acceptable candidate to have fruit-bearing branches.

Through their online page on Facebook, they can report future events and help you track the progress of their pear, cherry and plum grafts.

Be sure to spread this along, if you like it, with your friends and even inspire anyone you know. Anything can become possible with a little dose of inspiration.
From: Organic and Healthy

Days Of Eating Fish From The Ocean Are OVER