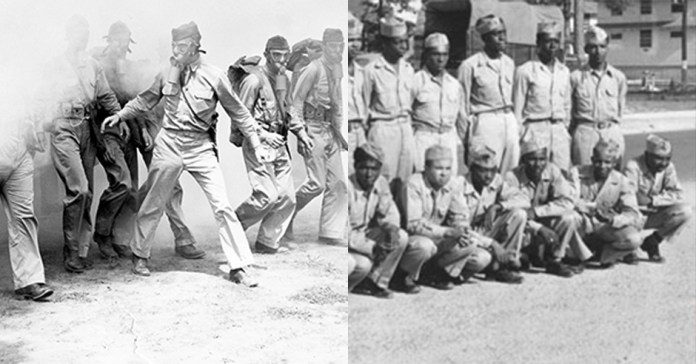 In order to test chemical weapons, which cause lung and skin problems, about 60,000 black soldiers were locked in gas chambers exposed to chemicals.

The effect of gases was tested on black skin without any hypothesis of denial; many of them still suffer from skin irritation and detoxification problems.

This news about the racial assault of soldiers has been kept secret until recently, unfortunately it is neither a unique case nor a novelty, once the Tuskegee experiment, in which the Tuskegee Institute and the United States Public Health Service studied the natural progression of Syphilis in 600 blacks, who were never notified of their condition and were not treated.

In the 1950s, the CIA and the United States released half a million mosquitoes with yellow fever and dengue fever in Florida’s black communities, leading to various illnesses and deaths. The government wanted to assess the use of mosquitoes as military weapons.

During the 1950s and 1960s, the poor neighbourhoods of Black St. Louis were used in Cold War experiments in which the Army sprayed a tethered radiation toxin called zinc cadmium sulphide, a fluorescent powder. Thousands probably inhaled the toxins.

For years, the black community has warned of abuses against their communities, without being taken seriously. But as the latest Pentagon news shows, these conspiracies are not theories but reality.