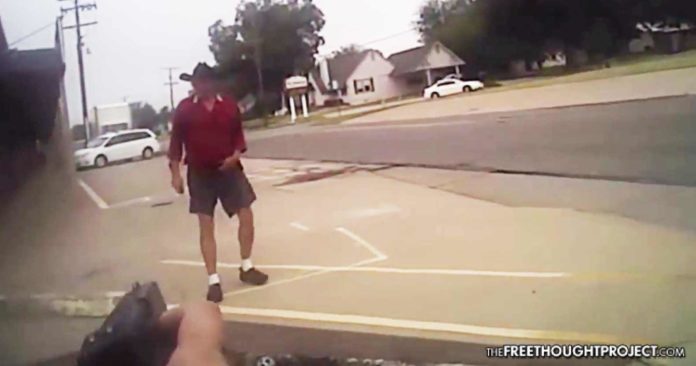 Muskogee, OK — On Friday, it was announced by the Muskogee County District Attorney’s office that the officer who shot a mentally ill man for standing in front of him holding a knife was justified. Body cam video, taken from the officer who shot Sean Ellis, shows how absolutely unnecessary this shooting was.

On August 7, police claim that a citizen flagged down an officer to tell them about a mentally ill man wearing a cowboy hat that was acting strangely. Ellis, 44, was that man.

Although police claim the concerned citizen said he had a gun, he was armed only with a knife, which was being worn on his belt prior to police stopping him.

Before being approached by police, Ellis had done nothing wrong. He had harmed no one. However, only a few moments after a citizen told police he was acting strangely, Ellis was dead.

The shooting took place at 7:45 am and was captured in its entirety on officer James Moore’s glasses-worn body camera. When police originally issued their report on why Moore shot Ellis, they claimed Ellis “lunged” toward the officer. However, as the video shows, this is not true.

As the video begins, officer Moore jumps out of his car and immediately begins pursuing Ellis with loud commands. Ellis, who was in a clearly diminished mental state simply walked away.

Remember, Ellis had not committed a crime, nor had police suspected him of committing a crime. By many measures, Ellis should’ve been able to legally walk away from the officers.

That did not happen.

“Do not pull the knife. Drop that knife!” Moore says as the clearly panicked Ellis responds to what he perceives as his would-be aggressors by pulling out the knife.

Still, however, Ellis did not run at officers, or do anything other than stand there.

As the officers yelled at Ellis — which is a terribly ineffective way of dealing with people in a mental health crisis — he became more unstable.

“Thou shalt not k…,” utters Ellis as Moore dumps three rounds into the mentally ill man.

Ellis falls to the ground, writhing in agony as he begs the cops for help.

“Oh, God, help me, I can’t move,” Ellis pleaded as he bled out in the parking lot.

As you watch the video below, take note that Ellis never lunged at the officer. He barely took a half step forward—slowly—before being shot by Moore.

As Tulsa World reports, the police department stated that a Taser wouldn’t have been appropriate in that situation because “a suspect brandishing a knife is considered an immediate threat of serious bodily harm or death,” with officers trained that the appropriate response is deadly force.

However, to the contrary, TFTP has reported numerous incidents in which brave cops deploy tasers or other means to disarm mentally ill people armed with knives. The bottom line was that Moore was simply too scared and probably shouldn’t have ever become a cop in the first place.

As New 6 reports, Officer Lincoln Anderson said at the end of their investigation, they’ve seen no wrongdoing in Moore’s actions, because Ellis was a threat to everyone else around.

“If he’s going to approach an officer in a violent manner, that’s not to say he won’t approach just a regular citizen in the same way,” Anderson said. “As far as our investigation, Officer Moore didn’t violate any policy or use any type of excessive force.”

Watch the video below, then ask yourself if Ellis approached anyone in a “violent manner.”

Mentally ill individuals have a 1,600% higher chance of being killed by police than anyone else, regardless of race. All too often, we see good people, who are in need of medical help – gunned down by officers because they ‘fear for their lives’ due to a complete lack of training in dealing with the mentally ill.

However, there are cops out there who show restraint and heroism in the face of danger. Josh Hilling is one of them.

On March 29 of last year, Officer Josh Hilling faced down with a man apparently at the end of his rope with nothing to lose. He was now attempting suicide by cop.

“Kill Me! Mill Me!” Aleman said dozens of times as he came at Hilling after refusing to be patted down for walking along the interstate. In Aleman’s hand was a huge Bowie knife.

At this point, every cop in the United States would have been entirely justified in filling Aleman with holes. However, Hilling didn’t react like every other cop would — he respected the preservation of life.

A single non-lethal shot was fired, and Hilling took a defensive stance instead of an offensive one. Instead of automatically killing Aleman, who was a significantly lower threat now with a bullet hole in his abdomen, Hilling merely backed up and tried to calm him down.

Eventually, as his backup arrived, those cops didn’t shoot either, and no one was killed. This could’ve happened with Ellis too.