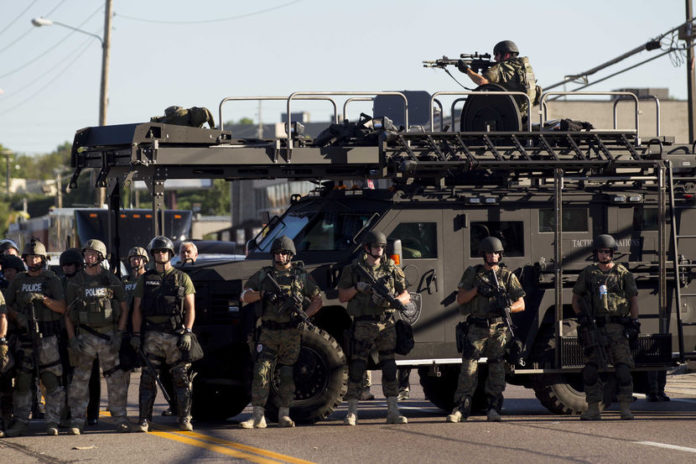 President Donald Trump continued his anti-Obama fixation Monday by reversing his policy which removed restrictions on the types of military gear the Defense Department can give to local police departments.

Attorney General Jeff Sessions announced the change in a speech to the Fraternal Order of Police in Nashville on Monday, reported USA Today.

The executive order “will ensure that you can get the lifesaving gear that you need to do your job and send a strong message that we will not allow criminal activity, violence, and lawlessness to become the new normal,” he said.

Police in many countries do not even carry firearms, so what exactly is the job of an American police officer if they need advanced military gear to complete it?

Sessions believes law enforcement was negatively impacted by not being able to use more advanced military equipment against unarmed civilians, citing what 1 sheriff said regarding 1 tool in a theoretical situation which is extremely rare.

“One sheriff told me earlier this year about how, due to the prior administration’s restrictions, the federal government made his department return an armored vehicle that can change the dynamics of an active shooter situation,” he said.

Janai Nelson, the group’s associate director counsel, said the policy change “puts more firepower in the hands of police departments that remain largely untrained on matters of racial bias and endangers the public. Inviting the use of military weaponry against our domestic population is nothing short of recasting the public as an enemy.”

Kanya Bennett of the ACLU said: “We have an epidemic in the United States of police using excessive force, particularly against people of color, with injuries and deaths mounting. It defies logic to arm the police with weapons of war.”

Sen. Rand Paul, R-Ky., laid out his opposition to Trump’s move in series of tweets.

The militarization of our law enforcement is due to an unprecedented expansion of government power in this realm.

Since 1990, the Defense Department has been allowed to transfer surplus military equipment and supplies to federal, state, and local law enforcement. The program was allegedly originally intended for counter-drug operations, but was later expanded to include all police matters.

After the ridiculous police response in Ferguson, Missouri in 2014, the Justice Department concluded that the use of military-style equipment made matters worse.

That was when President Obama put some equipment off limits — including tracked armored vehicles, bayonets, and grenade launchers — and required a showing of need for tactical vehicles with wheels.