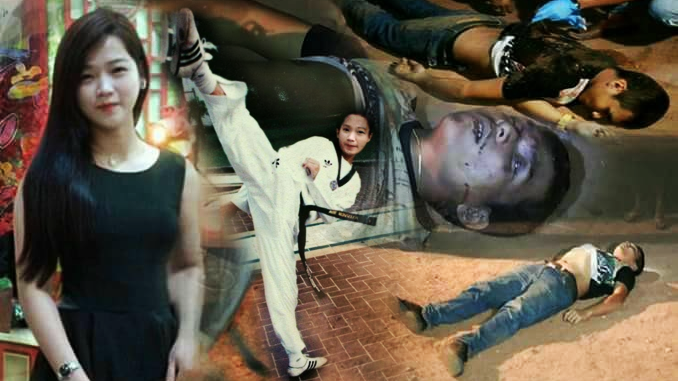 Two men armed with knives had tried to attack a lone woman driving back from Penampang in Sabah but the situation took a turn for the unexpected.

According to a posting on Kelab Info Malaysia Facebook page, the victim said she felt she was being followed by two men on a motorcycle. Subsequently she pulled over to let them pass but instead they stopped and told her to roll down her car window.

At this point, the woman, identified as 20-year-old Alice Lien Hua who was alone did something unexpected. She alighted from the safety of her locked car and faced the two men who were armed with knives.

According to Alice, the men demanded for money and when she couldn’t produce any, one man tried to drag her into the bushes while another headed for her car to grab her bag.

From that life-threatening situation, the woman somehow gained the upper hand and not only fought off her attackers but managed to injure them so badly, that they are now lying in coma in the hospital.

According to local Sabah online news blogs, Alice had landed blows on her attackers and also rammed them with her car, causing them to be rendered unconscious.

The Facebook posting states that the woman reportedly contacted a friend from the Criminal Investigation Department of Inanam in Kota Kinabalu and three officials who investigated the incident found that the two men were illegal migrants with no identification documents.

The suspects were reportedly taken to a local hospital in Luyang while the victim went to file a police report of the incident at the Kota Kinabalu police station.

After Kelab Info Malaysia shared the news and identified the victim, it was widely shared on social media that the woman in question was a former martial arts exponent who represented Sabah in competitions.

The victim later posted a comment on Facebook asking viewers if they think she would be charged for injuring the men but was instead inundated with praises for her gutsy self-defense.

“Macam ni yang kita mahu dengar! Penjenayah mampu ditewaskan!” [This is what we want to hear! A criminal who is defeated by his victim instead!”] one netizen commented.

Others highlight the importance of learning self-defense as one can never know when we might have to defend ourselves.

After news of the woman foiling her attempted rape went viral, Kota Kinabalu police chief ACP M. Chandra said that no such report had been lodged on the incident, it was reported by The Sun Daily.

There was no further information provided as to the source of the viral photographs and Facebook account provided in the original posting by Kelab Info Malaysia.

Meanwhile Penampang police chief DSP Rosley Hobden was quoted by another local English news daily as brushing aside the incident as a hoax.  However, the victim has also come forward to explain her hesitation in making an official complaint for fears of being charged instead which you can read here. 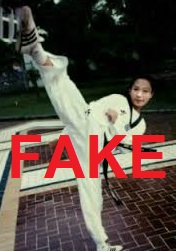 Despite various statements issued by Sabah police representatives, the victim Alice has insisted that her story is real and she was afraid to make a police report. She insists her case is authentic and even posted an update to her Facebook page this afternoon asking people not to be so hasty to judge her. She also disputed several accounts of the incident which she detailed in her recent Facebook posting which appears to be posted at the Kota Kinabalu airport as she is enroute to the United Kingdom.