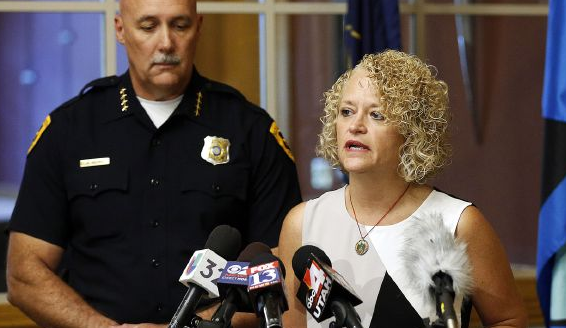 SALT LAKE CITY — Outrage is building over video of a Salt Lake police detective dragging a nurse to his squad car after she refused to allow a blood draw from an unconscious patient without seeing a warrant.

The video was shared publicly Thursday as the nurse in the video, Alex Wubbels, called for better training of police officers so that “harassment,” as she calls it, of hospital doctors and nurses can be prevented.

Wubbels is a charge nurse, or a liaison between patients and doctors and hospital managers, at University Hospital’s Burn Unit. She was later released, and no charges were ever filed against her.

After Wubbels’ story spread nationally in a matter of hours, Salt Lake City Mayor Jackie Biskupski called the arrest “unjust” and “unacceptable” during a news conference Friday. The mayor said she learned of the July 26 incident when she saw the video Thursday.

Biskupski called Wubbels this morning, she said, and apologized for “what she went through for simply doing her job.”

“No medical professional in Salt Lake City should be hindered from performing their duties, and certainly not be fearful of the police officers they come into contact and work in partnership (with) often to save the lives of others,” she said.

Standing at the mayor’s side, Salt Lake Police Chief Mike Brown said the department took immediate action after the incident, including updating its policies regarding blood draws, meeting with representatives from the hospital and University of Utah law enforcement, and apologizing for what occurred.

Brown also confirmed that the Salt Lake police detective in the video, Jeff Payne, has been suspended from the blood draw program but has not been placed on leave.

“His access to situations like this will be limited,” the chief said. “He’s on a modified duty with limited responsibilities and duties.”

The department’s investigation of the arrest includes a review of all officers involved, he said.

Brown conceded he was “alarmed” by what he saw in the officer’s video, saying he hopes the department can “learn from mistakes.”

“I am sad at the rift this has caused between law enforcement and the nurses we work so closely with,” he said.

Gov. Gary Herbert also weighed in on the incident Friday morning, saying on Twitter that “the footage of Alex Wubbels’ arrest is disturbing. We trust that the @slcpd will quickly respond and rectify the situation.”

Biskupski announced that while an internal investigation is ongoing regarding Wubbels’ arrest, the city’s civilian review board will conduct its own inquiry into Payne’s actions.

Additionally, the mayor emphasized, “I have reiterated to Chief Brown that I expect the highest level of professionalism from him and his team,” including instructing the chief to review all department policies and trainings meant to ensure respect between officers and the people they encounter.