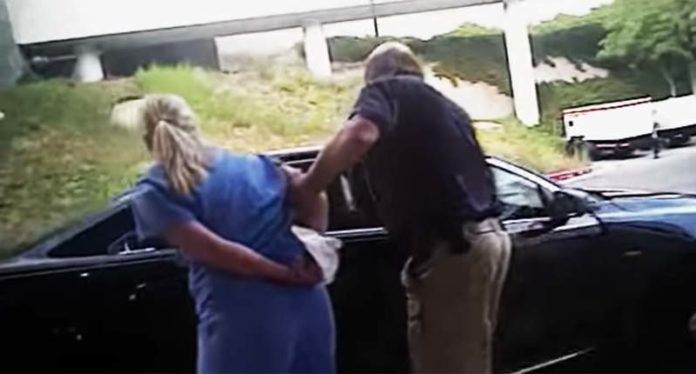 Police bodycam video has been released showing a Utah nurse handcuffed and taken into custody for refusing to violate state law by drawing blood from an unconsciousness patient.

“This is crazy. This is crazy. Why is he so angry?” Wubbels can be heard saying as Payne cuffed her and dragged her away from the patient.

Wubbels said Payne demanded she draw blood from a suspect brought to the hospital because he wanted the blood for an investigation and she refused because he needed a warrant and the patient was in no shape to give consent after being severely burned in a truck accident that left him near comatose. Doing as the officer ordered would have been a violation of state law, which the officer either didn’t know about or didn’t care about.

“I’m doing what I’m being told by my boss, and I’m going to do what my boss says,” Payne told the nurse, adding that she was allowed to take the blood via what is known as “implied consent.”

Wubbels and her co-workers told the officer that the law had changed and their idea of “implied consent” was no longer valid. Payne’s response was, “She’s going to jail.”

“Why?” someone asked the irate officer.

Wubbels says she doesn’t feel safe as she is cuffed and removed by the out of control officer.

“Sir, you’re making a huge mistake right now,” a hospital staffer then told the cop, who replied, “I’m leaving now, with her.”

Wubbels said she was taken out to the police cruiser and held for over 20 minutes before she was finally released.

At a press conference on Thursday, Wubbels shared the video and explained, “I just feel betrayed, I feel angry. I feel a lot of things. And I am still confused. I’m a health care worker. The only job I have is to keep my patients safe. A blood draw, it just gets thrown around there like it’s some simple thing. But blood is your blood. That’s your property. And when a patient comes in in a critical state, that blood is extremely important and I don’t take it lightly.”

Chief Mike Brown saw the video and referred to it as “very alarming,” adding that Payne is still on active duty with the department, but has been suspended from the blood draw program and is the subject of an internal investigation.