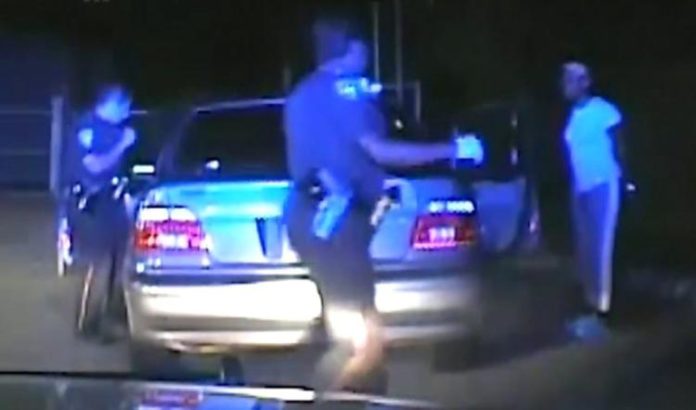 A woman who claims to have been “sexually assaulted, raped and molested” during a traffic stop has had her lawyer obtain footage of the incident and has had him post it on his website. The move was prompted when the charges of “official oppression” of the two deputies involved the body cavity search were dropped on Aug. 4. Police alleged they had detected the odor of marijuana in the  Corley’s vehicle which prompted the search.

Cammack, who represents 23-year-old Charneisha Corley, told Houston’s Fox 26 News the video shows what amounts to an 11-minute “rape by cop” on June 21, 2015.

An officer “body slammed Miss Corley, stuck her head underneath the vehicle and completely pulled her pants off, leaving her naked and exposed in that Texaco parking lot,” Cammack said. “They then took Miss Corley and placed both ankles behind her ears spread eagle position and started to search for something in Miss Corley’s cavity in her vaginal area.”

“That was extreme, to pull my clothes down, in front of people,” Corley can be heard saying on the video after the search. “People were watching. You didn’t see people walking around?”

Investigators claimed 0.02 ounces of marijuana was found in Corely- which she and her attorney denied. When subsequently charged with the misdemeanor offenses of resisting arrest and possession of marijuana, Corely saw both charges dropped as  Harris County District Attorney’s Office had nothing on her.

Seeking some semblance of justice for what happened to her, Corley “filed a multi-million dollar civil lawsuit against the Harris County Sheriff’s Office after the traffic stop”. But it was only when the two deputies involved had their charges dropped on Aug. 4, that Cammack was prompted to post the video on his website.

“Once the community sees this video, they’re going to be outraged, disgusted,” Cammack told Houston’s KTRK-TV.

The attorney did not return a request for comment from HuffPost on Tuesday.

Corley, in a 2015 interview with HuffPost, said she was running an errand for her sick mother when deputies pulled her over and accused her of running a stop sign. The deputy said he smelled marijuana coming from the car, which in Texas is probable cause to search a vehicle.

After a fruitless look inside the car, the lawman summoned a female deputy and events spiraled out of control, Corley said.

“They sexually assaulted, raped me and molested me,” Corley told HuffPost.

Harris County prosecutor Natasha Sinclair told FOX 26 News that she does not condone what happened.

“No one in this office stands by the search the way it was conducted,” she said. “No one thinks it’s appropriate. It should not have happened.”

However, Sinclair said the deputies actions did not amount to a criminal act.

The civil suit is pending.

Watch the video below (viewer discretion advised) and let us know if you think Corley’s claim that she was sexually assaulted can be substanuatated by whats on film. Do you think the video depicts a sexual assault and that the officers involved should be reprimanded for their actions even though prosecutors deem no “criminal act” was committed?