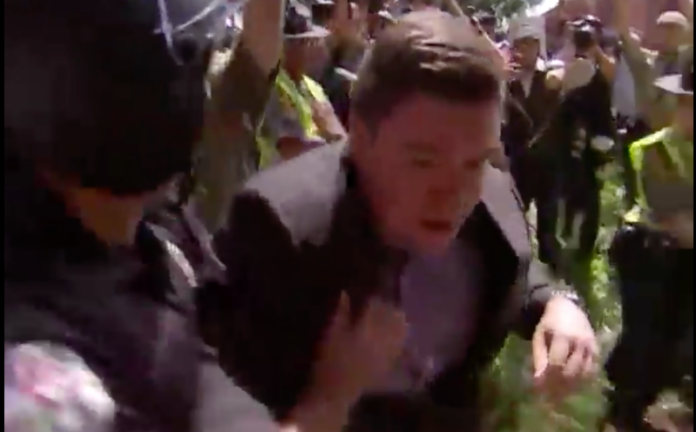 Jason Kessler, organizer of the disastrous turned deadly rally for white supremacists in Charlottesville, Virginia attempted to address the public about the violent events that unfolded over the weekend during a press conference this Sunday- but ended up being assaulted and ran off by the angry crowd. In several videos and tweets, Kessler can be seen running from the crowd like a coward with his tail tucked between his legs after he suggested that the deadly violence should be pinned on the city of Charlottesville for denying him and his racist cronies of their First Amendment right to freedom of speech.

In several videos and tweets, Kessler can be seen running from the crowd like a coward with his tail tucked between his legs after he suggested that the blame for deadly violence should be pinned on the city of Charlottesville for denying him and his racist cronies of their First Amendment right to freedom of speech and the “Charlottesville police officers refusing to do their job”.   Inciting the crowd further- his comments were largely taken as a veiled message that rallies such as these will continue, and will also continue to end in violence should these bigots not be allowed to say and do as they please.

As reported by Gizmodo:

Local paralegal Heather Heyer died and dozens were injured after suspected member of neo-Nazi group Vanguard America ran over counter-protesterswith his car, while two police officers died in a helicopter crash. The hundreds of event attendees staged brawls in the streets with anti-racist activists while guarded by rifle-toting militiamen, all largely with impunity from the police.

So yeah, there might be a reason Charlottesville simply wasn’t interested in whatever Kessler has to say. According to a video posted by WVIR-TV’s Henry Graff, members of the crowd chanted “shame” as Kessler approached the podium.

Crowd screams “shame” at Jason Kessler as he arrives. And chanting “murderer” pic.twitter.com/wCr5KdFePM

Kessler, for what it’s worth, seemed to be doing his best to incite the crowd.

“Today I just want to come before you, and I want to tell you the story of what really happened before this narrative is allowed to continue spinning out of control,” Kessler started his vile statement. “The hate that you hear around you? That is the anti-white hate that fueled what happened yesterday. What happened yesterday was the result of Charlottesville police officers refusing to do their job.”

“I disavow anything that led to folks getting hurt,” Kessler continued. “It is a sad day in our constitutional democracy when we are not able to have civil liberties like the First Amendment. That’s what leads to rational discussion and ideas breaking down and people resorting to violence.”

That sounds an awful lot like a threat of continued violence if white supremacists don’t get their way thinly veiled as an appeal to discourse, and Charlottesville residents seemed more than done listening.

In a video tweeted by BuzzFeed News’ Blake Montgomery, the crowd swarmed the podium. Subsequent photos and videos showed Kessler being rushed away by police in body armor.

Protesters chased Jason Kessler away from his own press conference in Charlottesville. Here’s my view: pic.twitter.com/fTXctHgzsi

Of course, Kessler didn’t have anything else to say for himself worth hearing. In a subsequent video posted by journalist Brook Silva-Braga, he responded to the question about the death by again saying the real cause was the “denial of First Amendment rights” to him and his compatriots. Kessler also denied any personal responsibility whatsoever for what occurred, saying “I don’t know what happened.”

I asked Jason Kessler if he bears any responsibility for the death in #Charlotteville yesterday pic.twitter.com/QIA9jiuczS

Away from the crowds Kessler later tweeted: “I tried my best but once again violence rules over speech and ideas in #Charlottesville. The First Amendment is finished it seems,”

What does it say about the alt-right if one of their so called leaders is as cowardly as Kessler? Do you condone how the crowd reacted to Kessler, and do you think his assault was well deserved? What do you make of his reasoning that the violence is to be blamed on the “denial of First Amendment rights”?

Racist Man Rants On Q Train: ‘Get The F**k Out Of My Country’ Threatens...

This Florida Sheriff Said Blacks Should Act Like Whites To Survive And Obama Was...